The Chennai Super Kings are back with a big blast in the IPL 2014. Facing a defeat in their opening game against Kings XI Punjab, this time they were more cautious and also there was a considerable change in their performance level in every aspect, be it be batting, bowling or fielding. They were high on the charge against the Daredevils who were surely meek in this match in Abu Dhabi. This match was a one sided match where the Lions (CSK’s logo) definitely roared loud of their victory. To everyone’s amazement they are rebound with a massive 93 runs victory over Daredevils. 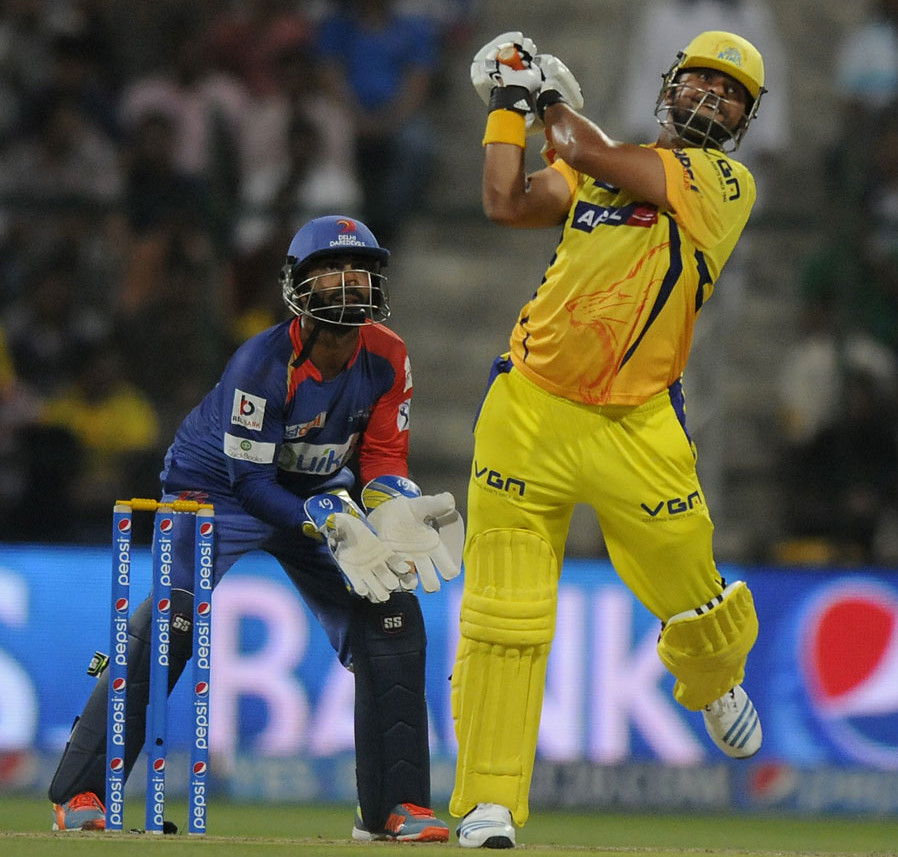 M.S.Dhoni, the captain of CSK, won the toss and clinically decided to bat first. It was indeed a smart decision considering the pitch type. But unlike their opening match, the openers failed to put a solid start as Brendon Mcculum (9) got out in the third over. Dwayne Smith (29) and Suresh Raina (56) contributed well in the effort of pulling a subtle start and made a partnership of 44 runs. Raina however was determined to play big shots and to redeem himself and his team after their defeat in the first match. Raina did form a backbone of CSK’s batting line up in the match and built a strong foundation for them for piling high target.

Daredevils on the other hand concentrated on accurate bowling but most of the deliveries were weak giving the batsmen free charge to hit across the ground. Jaydev Unadkat looked in great form. Nathan Couter-Nile, the fast bowler gave up his service when he went off field after bowling three deliveries due to severe injury while sliding to stop a ball.

By 16th over, clouds cleared around big targets and it was quite assumed that a big target was coming in front of Daredevils. Faf Du Plessis (24) and Dhoni(32) also consolidated well to put forward their smearing goal of high target. At the end of the innings the scorecard was 177 for 7.

DD faced a big target. They knew it wasn’t going to be easy. The openers came off to strike. DD felt an early blow when they lost Mayank Agarwal early in the innings departing with a score of 2. Things became worse when Murali Vijay was also dismissed by Mohit Sharma with a score of 11 runs. Ishwar Pandey then caught hold of dangerous Manoj Tiwary and dismissed him for duck. The scorecard read 17 for 3.

The match was skidding from Daredevil’s hand. They were in all sorts of trouble. JP Duminy, the hero for Daredevils also failed in the match scoring only 15 runs and getting leg before wicket on Dwayne Smith’s ball. Ross Taylor, the only hope for DD also gave up his wicket on Ben Hilfenhaus scoring only 6 runs. The captain Dinesh Karthik was in forefront. He scored 21 runs but then Ashwin bowled him out with scorecard reading 74 for 6. Jimmy Neesham was taken aback by Jadeja’s delivery and was dismissed. He was the highest run scorer of the entire Delhi innings scoring 22 runs. At this point, the match was quiet clear and the verdict was also out.  Ashwin then took Shami’s wicket who was dismissed for 1 run. Jadeja ended the innings for DD taking Shahbaaz Nadeem’s wicket who scored 3 runs. Coulter Nile did not bat as he was severely hurt. For CSK, Pandey, Jadeja and Ashwin handled the command by taking two wickets each.

The Daredevils stumbled and ended on 84 in 15.4 overs. A 93 runs victory in this format of the game is too impressive and astonishing.

Man of The match- Suresh Raina (for his brilliant half century)

Note- The game also showed some sense of Fair Play. R. Ashwin readily walked off the field when Shami hit the stumps at the non striker’s end where Ashwin was approaching. The umpire failed to notice the swiftness of the game and also Shami did not appeal for it. But realizing that he was out, Ashwin did walk off the field giving a sense of pride to his team mates. He not only won the match but also million hearts for this.