The Kings would be going into the game after back-to-back victories.

Colombo Kings have made a stupendous start to the 2020 edition of the Lanka Premier League. Though they had to work hard for their first win where the game against the Kandy Tuskers went into the Super Over. The team failed to defend 219 and went down in Hambantota. However, Colombo made amends and thrashed the Galle Gladiators by 34 runs in the five-over contest.

Andre Russell’s 19-ball 65 carried them over the finishing line in the rain-curtailed match. They will next be up against the Dambulla Viiking in the first of Tuesday’s doubleheader at the Mahinda Rajapaksha International Stadium. The Viiking, led by Dasun Shanaka, slumped to a hefty defeat at the hands of the Jaffna Stallions and would want to make some amends.

The pitch in Hambantota has been a belter for batting thus far in the tournament. Scores over 170 have been the stories in most matches thus far. The short boundaries haven’t made life any easier for the bowlers either.

There will be 14 cent chances of rain with quite a bit of cloud cover around. The temperature will mostly be in the 28 degrees Celsius with the humidity mostly in the 80s.

Playing Combinations for COL vs DAM

Dinesh Chandimal has been one of the class acts in Sri Lanka cricket, playing all three formats for his country. Even in the first game, he played a masterful knock while batting second.

To his sheer luck, the knock didn’t go in vain as his team crossed the finishing hurdle in the one-over eliminator. The right-handed batsman will be looking to play another knock of substance and lead from the front.

Upul Tharanga is an experienced campaigner having played for more than a decade. Though he isn’t a regular member of the Lankan team, his importance hasn’t gone down by any means.

In the first game, he got off the mark with a couple of scorching fours. In the Viiking’s second game he failed as well. However, he is expected to make amends in his team’s upcoming encounter

The prediction is for Dambulla Viiking to win the match. 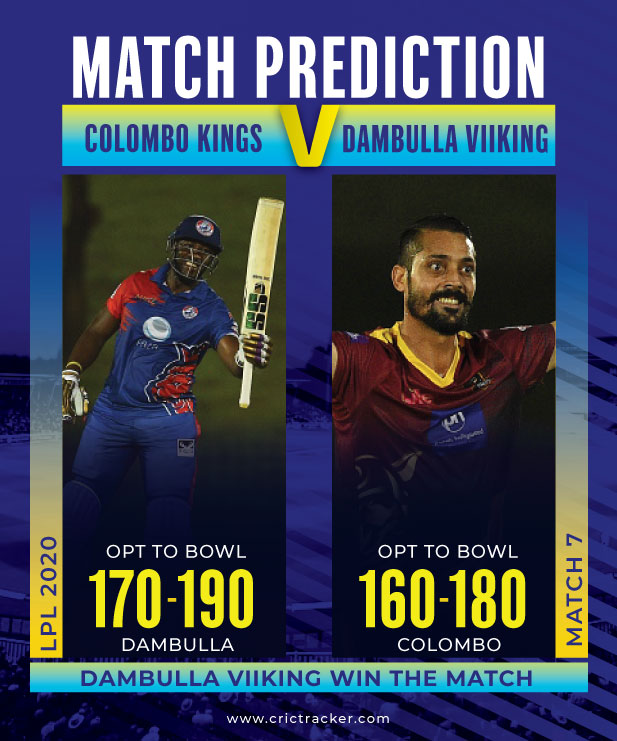