England’s highest-ever run-getter in Tests Alastair Cook wrapped up his career in style by hitting 147 in his final game at the Oval against India. Incidentally, he had also hit a hundred on debut against the same opposition in Nagpur in 2006. In an illustrious career spanning over 12 years, the left-handed batsman hit 12,472 runs in 161 Tests. He also played 92 ODIs scoring 3,204 runs and four T20Is scoring 61 runs.

At only 33 years and 259 days, Cook had the time to scale the Everest of runs and his retirement would definitely give relief to many Indian fans since he had posed a real threat to Mount Tendulkar which many had thought was insurmountable.

We may take this opportunity to compare the two batsmen’s careers till the point Cook played, i.e., 12 years and 161 Tests innings to understand whether the English batsman was any better than the Master Blaster when he retired and could go on and break his record had he played a few more years.

Tendulkar scored 15,921 runs in 200 Tests and 329 innings which means he leads Cook by 3,449 runs in 39 Tests and 38 more innings. But what were his statistics when he played the same number of Tests that Cook has played? Also, how do the two stand when the numbers are broken down further? 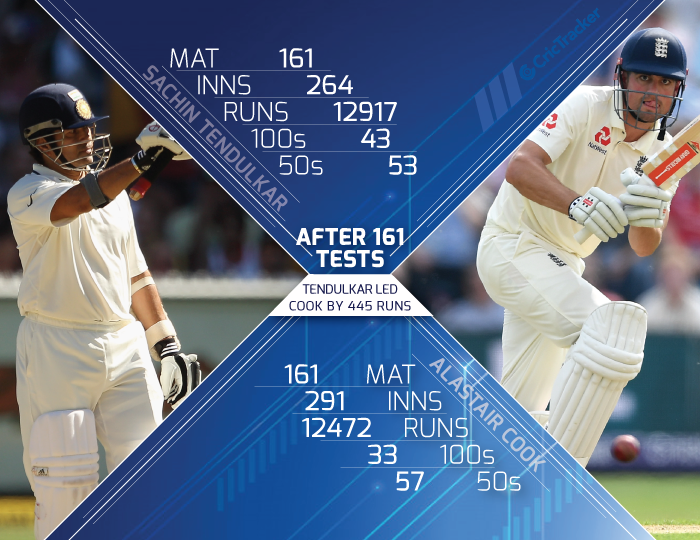 Tendulkar led Cook by 445 runs and scored 10 centuries more. However, Tendulkar was 35 when he played his 161st, two years older than Cook when the latter played that many Tests and that could have made a difference in Cook’s favour he had continued for another few years, provided he had more left in his tank. 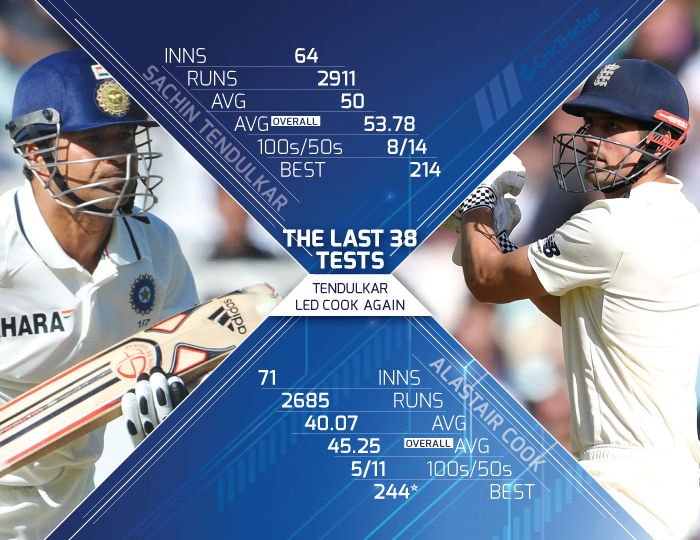 This is more of a hypothesis since the English opener will not play in reality those last 38-39 Tests to match the legendary Indian batsman’s landmark of 200 Tests. Tendulkar’s last 38 Tests yielded a total of 2,911 runs in 64 innings at an average of 50 which is 3.78 points down from his career average of 53.78 and he could manage another eight centuries and 14 fifties in his phase. 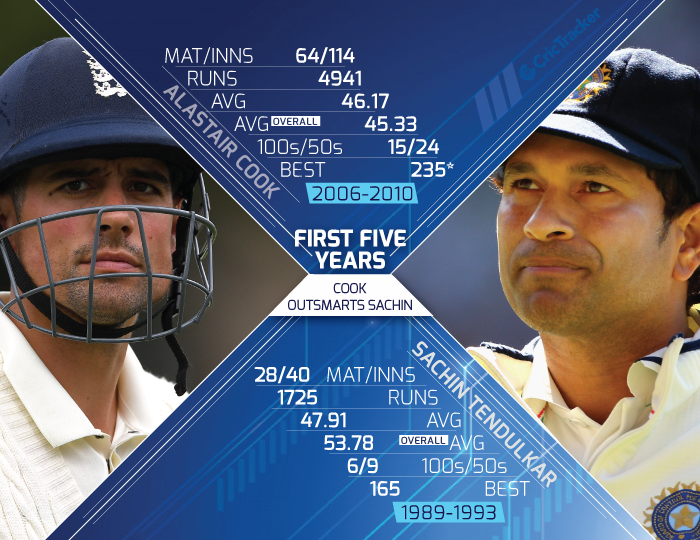 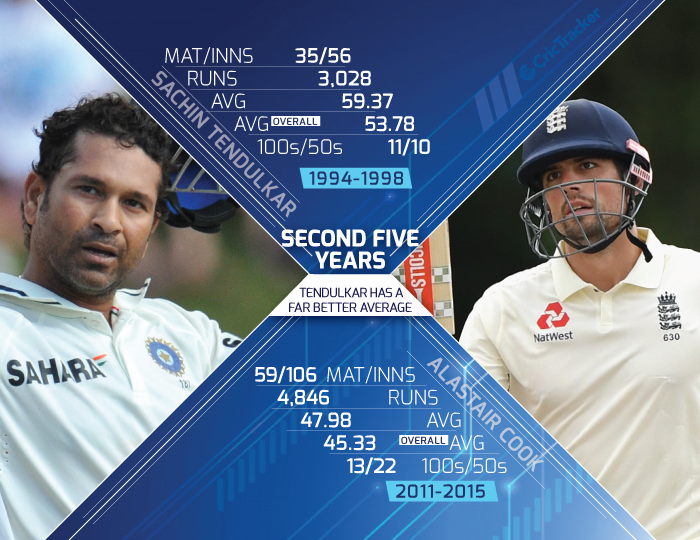 In the second five years of their respective careers, Tendulkar outdoes Cook with a far better average. He scored 3,028 runs in 35 Tests and 56 innings between 1994 and 1998 at an average of 59.37, which is 5.59 points more than his career average. He hit 11 hundreds and 10 fifties in this period.

Last three years: Cook has done much better than Tendulkar 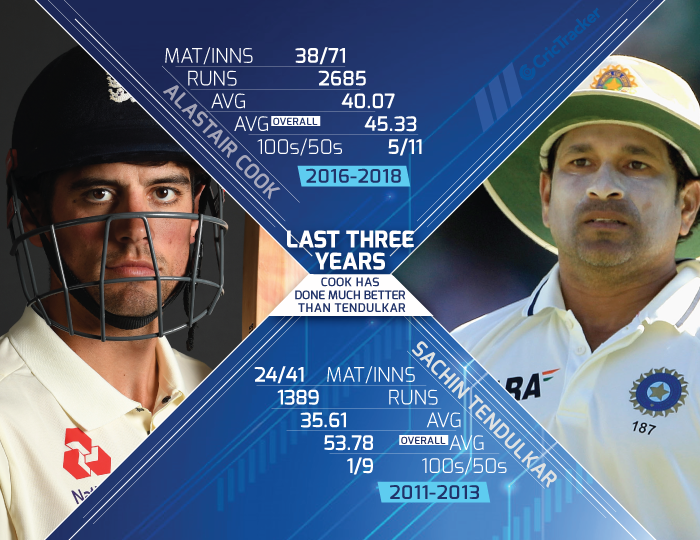 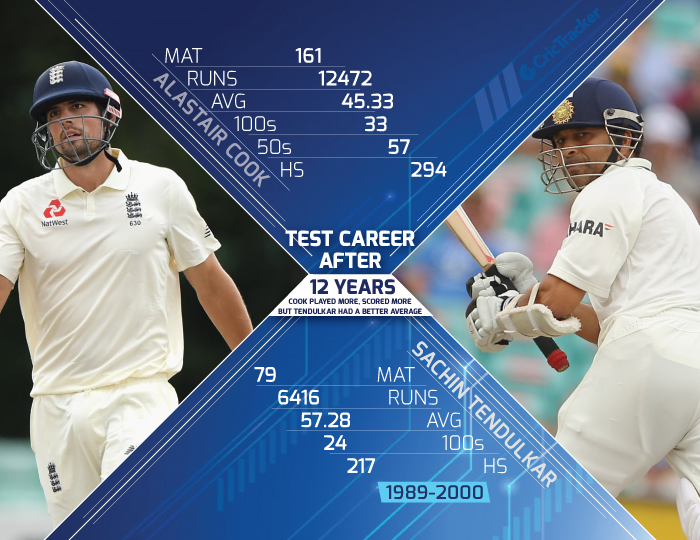 If we see the career of these two batsmen from only the perspective of a timeline, it is Cook who is an outright winner. Cook played 161 Tests in his 12-year career which means more than 13 Tests a year on an average. He scored 12,472 runs in this time at an average of 45.35 and hit 33 centuries and 57 fifties. Cook’s highest score remained 294.

India nevertheless played more ODIs than Tests compared to England and hence Tendulkar’s quantity proved to be less than his English counterpart. 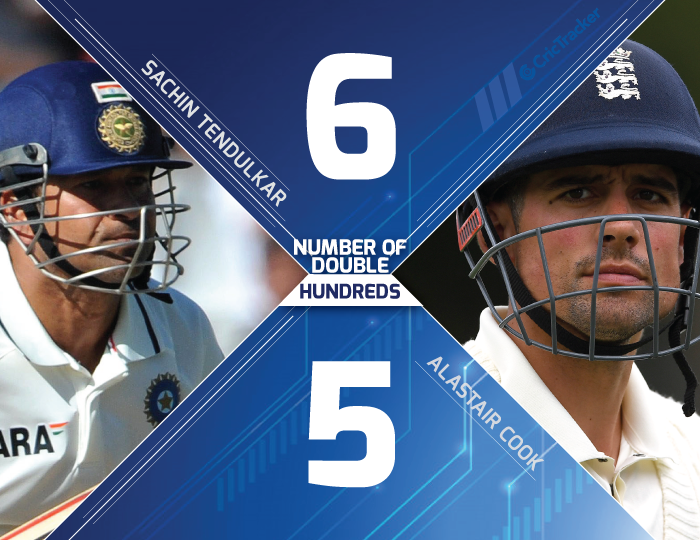 Cook scored five double centuries in his 161-Test career with two of them hit at home and remaining in Australia and UAE. Two of his three double tons came against Australia while one each against India, the West Indies and Pakistan. The highest is 294 scored against India in Birmingham and the lowest among his double hundreds is 235 not out against Australia in Brisbane.

Tendulkar, on the other hand, has scored six double centuries in his 200-Test career. He scored three of them at home while three abroad and of the three overseas scores, only one was hit out of the subcontinent. Six of his double hundreds came against Australia (twice), New Zealand, Zimbabwe, Bangladesh and Sri Lanka. His highest score is 248 not out against Bangladesh in Dhaka while the lowest among his double tons is 201 not out against Zimbabwe in Nagpur.