Spin bowling all-rounders are a safe bet on this surface with the likes of Mohammad Hafeez and Fabian Allen available for the taking.

The Eliminator of the Caribbean Premier League 2019 between St Kitts and Nevis Patriots and Trinbago Knight Riders will be hosted by Providence Ground, Guyana.

Defending champions, Trinbago Knight Riders looks to sustain their title defense in CPL 2019 as they are pitted against St Kitts and Nevis Patriots in the Eliminator match. Although they started off with four consecutive wins, Trinbago has failed to win a match in their last four attempts.

Injuries have played its part as well with Sunil Narine waiting on the sidelines. On the other hand, St Kitts and Nevis Patriots won five games out of their ten in the league stage with Evin Lewis and Carlos Brathwaite leading the way for them. Both sides possess a lot of experience with the likes of Kieron Pollard and Mohammad Hafeez taking in the field for the game.

A Super Over was the only way these two sides could be separated the last time they faced off against one another. Carlos Brathwaite put in the all-round masterclass to guide his side to a win. The corresponding fixture in Trinidad though saw TKR get the better of the Patriots courtesy of a good bowling performance.

With the Providence Stadium playing host to both the Qualifier 1 and Eliminator on Sunday, both teams would be eager to keep their campaigns alive and live to fight another day in CPL 2019.

Clear weather is on the cards for this game with no chance of rain interrupting the game. The temperatures should hover between 28 and 30 degrees Celsius during the course of the match.

Although the pitch at the Providence Ground is a good one to bat on, spin should have the final say in the outcome of the game. With this being a used pitch, teams should prefer batting first and set a total in a must-win game for either side.

After a slow start to CPL 2019, Mohammad Hafeez has gotten off to starts at the top of the order. His off-spin has also be utilized by Carlos Brathwaite at times which could yield a wicket or two on a turning track. Colin Munro has 215 runs in just six innings at an average of 43. Although the numbers do make for good reading, he is due for a match-winning performance this year.

Fellow south-paw, Evin Lewis is the highest run-scorer for SNP with 256 runs to his name. In what is a must-win game for either side, Lewis is the key for St Kitts and Nevis Patriots to make it to the next Qualifier of CPL 2019. 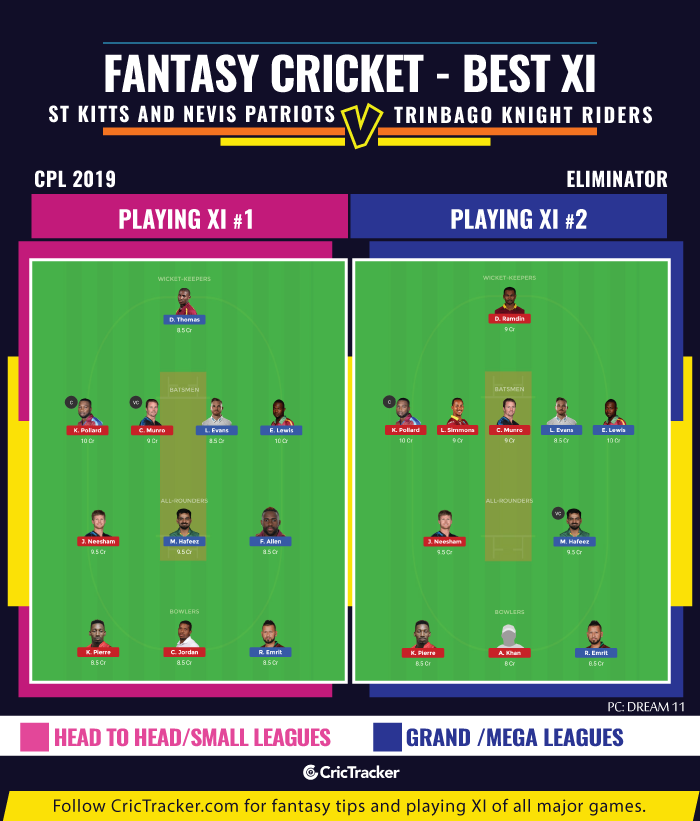 Kieron Pollard has been bowling a couple of overs on a consistent basis in CPL 2019. With the pitch slightly on the slower side, expect the TKR captain to bring home a good number of fantasy points.

Spin bowling all-rounders are a safe bet on this surface with the likes of Mohammad Hafeez and Fabian Allen available for the taking.