Andre Russell was hit on the helmet in the last match and there's no update on whether he'll play or not.

The Jamaica Tallawahs don’t seem to find light at the end of the tunnel in the 2019 edition of the Caribbean Premier League. After failing to defend 241, the team succumbed to their maiden defeat at the Sabina Park versus St Lucia Zouks by five wickets. With the skids already under them, the Tallawahs are next scheduled to lock horns against Kieron Pollard’s Trinbago Knight Riders at home.

Their bowlers have been taken to the cleaners. The Knight Riders are currently unbeaten, having won all their three matches at the Queen’s Park Oval. TKR’s next aim will be to continue their winning streak outside home as well. Albeit history says that the Knights have lost three out of their four games versus Jamaica in Kingston, on current form, the former seems to have the upper hand.

The pitch has been an excellent one for batting with scores around the 170-mark being a regularity. But the Zouks’ bowling showed that restricting the batters is possible. Also, with the short boundaries, chasing seems to be a safer option. There are no predictions of a downpour with the temperature around the 28 degrees Celsius mark. Dew is expected to play its part as well.

Andre Russell was hit on the helmet by a bouncer from Hardus Viljoen after which he was taken for a CT scan. Though medical reports have cleared him of a serious injury, there’s a big chance of him missing out the next match. In that case, Imran Khan, another all-rounder, is likely to take his position. The onus will be on Chris Gayle and Glenn Phillips to stitch a partnership in the powerplay.

Chadwick Walton and Rovman Powell’s role will be crucial in the middle overs. Their bowling department has been a massive disappointment. Jerome Taylor is yet to pick up a wicket in three games, having conceded runs at 11.68. Apart from him, six more bowlers have economy of above 11. Thomas has seven wickets, but they have come in stages with the opponent in the brink of a win.

The Knight Riders are set to have Colin Munro and Darren Bravo back in their setup. Even as Munro is coming back from the New Zealand T20I series, the latter is available after the concussion he suffered in the second Test against India. Munro is likely to replace Lendl Simmons and Bravo’s inclusion means that the axe will come down on Tion Webster, who got a fifty in the second match.

Ali Khan missed the last match due to an ankle injury and he’s likely to come in place of Anderson Phillip. Narine has been fair at the top with the bat, but with an economy of 5.58, he has been extremely tough to pounce on. Seekkuge Prasanna was taken apart by Fabian Allen in the first game, yet has an economy of 7.28. Neesham, Pollard and Hasnain are the other key players in the eleven. 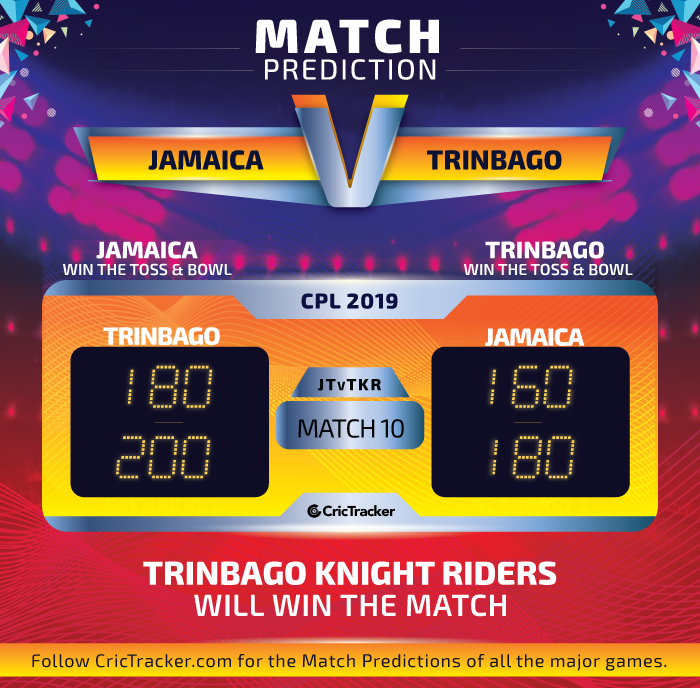