The Jamaica Tallawahs keep languishing at the bottom of the table and their next match versus the St Lucia Zouks at the Gros Islet is a must-win affair. If Chadwick Walton and Co lose the encounter, then they’ll be the first team to get eliminated from this edition’s CPL. Last time around, they defended a paltry 127 against the Barbados Tridents and that victory will keep them in good stead.

Last time around, Rahkeem Cornwall blew the Tallawahs with a match-winning fifty, but the latter’s bowling attack is an improved lot from that game. The Zouks, on the other hand, are fourth on the table, and are coming off a victory against the St Kitts and Nevis Patriots. Though the Zouks are yet to beat the Tallawahs at home in four games, they’ll fancy their chances against the cellar dwellers.

The pitch hasn’t been all that easy to bat on, especially in the second half. It has helped the spinners to a great extent and the track isn’t expected to change much. Batting second can be a difficult prospect if the opposition get over the 160-run mark. Since the match starts at 8 PM local time, dew will be there throughout.

The Zouks won’t want to tinker with their winning combination. Cornwall has tended to strain a wee bit following a good start. The hulk-like figure will look to replicate his show versus the Tallawahs from the last meeting. Andre Fletcher has been getting starts, but it’s time for him to convert them into something substantial. Colin Ingram has 102 runs at an average of 34 with a fifty against TKR.

But it’s Colin de Grandhomme, who has looked the most comfortable in the middle, having gotten 182 runs at a strike-rate of 145.60. Christopher Barnwell and Darren Sammy showed that they can hit the long ball. In the bowling area, Fawad Ahmed has been to be at his very best. Kesrick Williams’ pace variations will be critical as well. The onus will also be on the experienced Hardus Viljoen.

Liton Das has joined the Tallawahs and he can play in place of Javelle Glen. Glenn Phillips, the leading run-scorer with 330 runs, needs to remain at his best. Chris Gayle, apart from his century versus the Patriots, has only notched 98 runs in seven games. Chadwick Walton has to show consistency and hasn’t done much barring two half-centuries versus the Tridents and the Patriots.

There’s not much to speak about the rest of the batting and the team has missed Andre Russell. In the bowling department, Imran Khan, Ramaal Lewis and Zahir Khan’s role will be critical on a slow surface. Interestingly, Dwayne Smith has an economy of 6.54 to go with four wickets. Shamar Springer and Jade Dernbach’s change of pace is also expected to come in handy on the helpful strip. 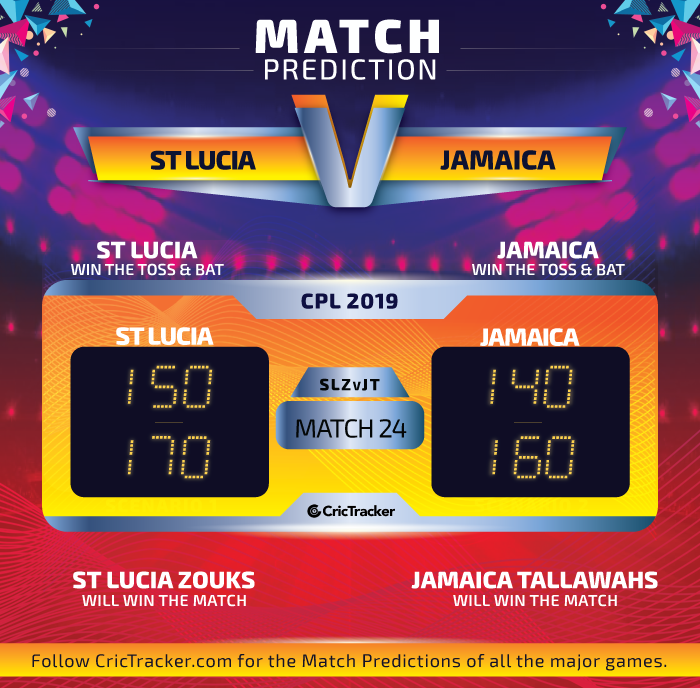