The Kingston’s Sabina Park often records scores around 170 by the first batting team.

The 9th game of the Caribbean Premier League (CPL) 2019 will be played between Jamaica Tallawahs and St Lucia Zouks at the Sabina Park in Kingston, Jamaica.

Jamaica Tallawahs made an interesting start to their season as they fell 22 runs short in a big chase against Trinbago Knight Riders in their first game. Later against St Kitts and Nevis Patriots, the Tallawahs posted the highest CPL total with help of Chris Gayle’s hundred. However, the fun didn’t last even two hours as the Patriots chased down the target with seven balls to spare.

They will be playing as many as five matches in the next eight days all at their home venue, the Sabina Park in Kingston. Their first home game will be against the St Lucia Zouks, who are also looking for their maiden win of the season. The St Lucia team fell 13 runs short of Guyana Amazon Warriors’ target in their first game. Against the defending champions TKR, their total of 167/5 was too less for a win.

The weather might not play its part during the first game of the CPL 2019 at the Sabina Park. The skies are expected to be clear throughout the day. There are chances of the showers later in the day which might not even happen during the match timing.

The Kingston’s Sabina Park often records scores around 170 by the first batting team. The sides batting first posted 175 and 178 respectively in the two matches played at this venue in 2018. Any team with good intent and depth in their batting can chase it down comfortably.

Zahir Khan will join Jamaica Tallawahs after the completion of the one-off Test in Bangladesh.

HardusViljoen will be hopeful about replicating his T20 Blast success into the CPL. Colin de Grandhomme had some big matches in terms of performance against Sri Lanka with both bat and ball. George Workerawait to find a proper role for himself in the Jamaica Tallawahs’ line-up.

Andre Russell and Rakheem Cornwall will be the crucial as captain and vice-captain given the roles they have played in the tournament so far. 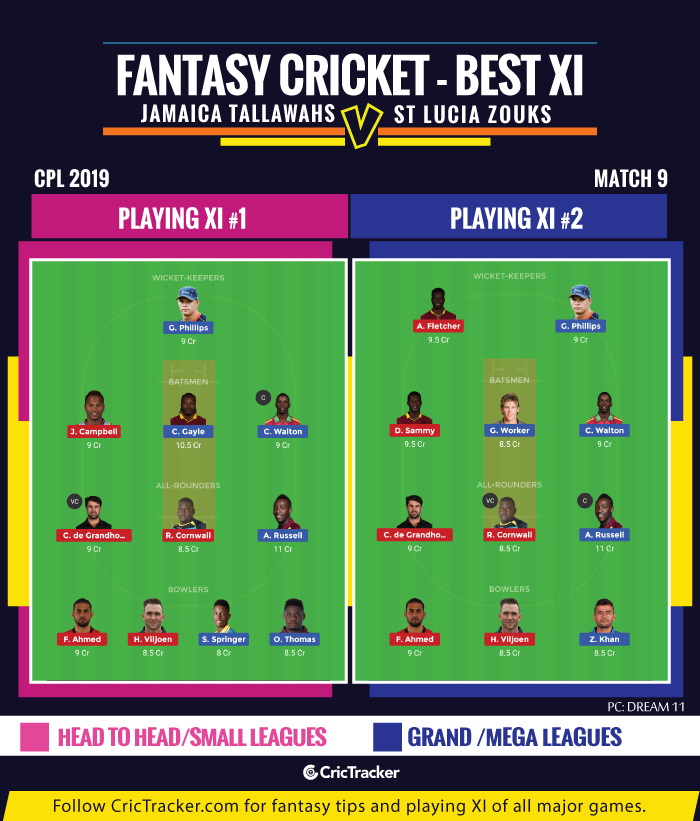 The St Lucia Zouks have a bowling attack which is capable of dismissing Chris Gayle early on. It is one of the reasons why we have not picked Gayle as captain or vice-captain in our Team No.1.

The Jamaica Tallawahs are expected to register their first win of the tournament.