This battle is as much about pride as both the teams have been not just lost their games but have lost them by demeaning margins.

St Kitts and Nevis Patriots will take on the Jamaica Tallawahs in the 18th match of CPL 2020 on 29th August at the Queen’s Park Oval in Port of Spain. The Patriots have hit rock bottom after tolerating four defeats in their five league encounters thus far. They are entering this match after two thrashing defeats handed to them by the Barbados Tridents and St Lucia Zouks. In their last league face-off, they were crushed brutally by the might of Mohammad Nabi, whose impeccable 5-for bundled them to 110/9.

The top-order had nothing to show as none amongst the top five batsmen even entered double figures. Ben Dunk’s 37-ball 33 and Alzzari Joseph’s little cameo down the order ensured that Patriots had something to bowl at, however, to win with such an under-par total could have only been by a miracle. Leg-spinner Imran Khan did his best in trying to make things work with the ball as he got a 3-for, although it of course did not have any material bearing on the result as their adversaries chased the total in 14.4 overs.

The other team involved in today’s encounter has not too much to celebrate either as Patriots plus one victory is their equation in the table. The Tallawahs have left gaps in plenty and quite unsurprisingly, they have seen themselves at the receiving end. They had to face Kyle Mayers’ wrath in their last game against Barbados Tridents, who set them a modest target of 149.

While the total was not too big, it was not small enough to afford merely 38 runs from the top five. However, that is how much the Tallawahs’ top-order added. Jermaine Blackwood and Nkumrah Bonner contributed fair bits but the lack of support around them led their efforts to go in vain. Spinners Sandeep Lamichchane and Mujeeb-ur-Rahman have constantly performed and they did continue as they bagged 5 wickets between them and the latter even contributed 20 with the bat.

This battle is as much about pride as both the teams have been not just lost their games but have lost them by demeaning margins.

This being the second encounter of the day, the track can be expected to be on the slower side. The entire season thus far has more or less belonged to the spinners and it is implied that they will be in the hunt of wickets this time as well. The pacers need not lose heart as the new ball can be made use of by them. Chances of rain are not severe enough to cut short the match.

Chris Lynn has failed to impress throughout the tournament as has Evin Lewis apart from the one quick-fire knock of 89 against the Barbados Tridents. Jahmar Hamilton had a terrible run before being benched but the Patriots might want to give him another chance. Denesh Ramdin failed in the last game but he was no exception.

Ben Dunk has not been able to burst the firecrackers, however, he has been contributing small runs here and there in every game. Nick Kelly has been a start-stop affair too though he is expected to play today’s game. In a pool full of problems, one cheerful event has been skipper Ryad Emrit’s run with the ball as he has constantly taken wickets at a brilliant economy.

One amongst Sohail Tanvir or Sheldon Cottrell should make way inside whereas after taking three wickets in the last game, leggie Imran Khan is certain to play. Jon-Russ Jaggesar has had a lukewarm tournament but he has done just enough to keep himself in the eleven as has Alazarri Joseph.

Chadwick Walton might be unlucky with the bat but he has been extremely lucky that his team does not have an ideal replacement for him and he, therefore, keeps getting a spot in the eleven despite his abysmal performances. Glenn Phillips has had a good run at the top and must continue doing the one good thing that he has done.

Jermain Blackwood looked good with the bat with others falling like nine cards. Asif Ali and Rovman Powell missed in the last game but they have got some runs in the middle-order. Nkumrah Bonner was the other batsman who was able to stand and score a little before perishing. Andre Russell has not been able to live up to the expectations neither has Carlos Brathwaite.

Sandeep Lamichchane and Mujeeb-ur-Rahman’s form with the ball has been another positive in a very short list of positives for the Tallawahs. Fidel Edwards has done well to get his economy in check and is expected to play along with Veerasammy Permaul.

The prediction is for Jamaica Tallawahs to win the match 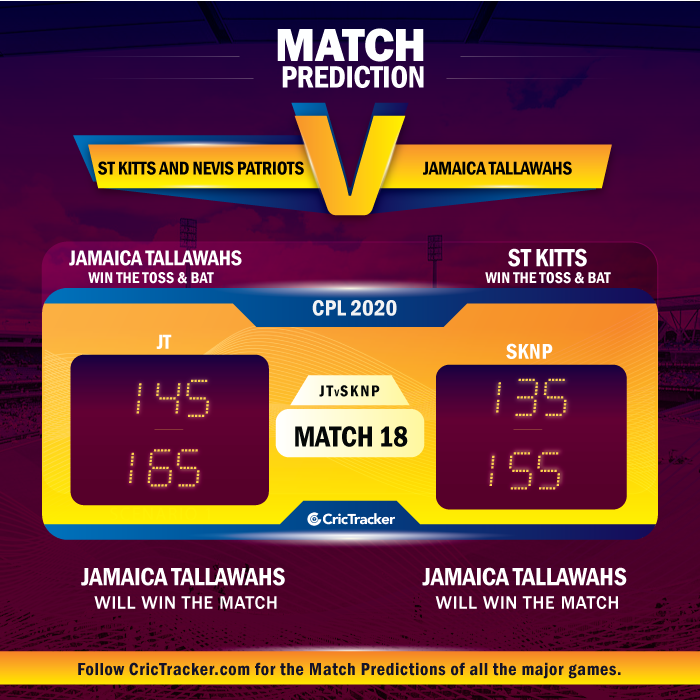