On head-to-head, the Knights are leading the Zouks by 11-2.

The four semi-finalists of the 2020 Caribbean Premier League (CPL) have already been decided. Hence the 27th match of the league stage between Trinbago Knight Riders and the St Lucia Zouks may not hold much significance. As far as the Knights are concerned, they have been unstoppable, to say the least. They are coming off a 59-run victory over cellar dwellers St Kitts and Nevis Patriots.

Moreover, even if they lose their last two matches, TKR will be finishing atop the points table after the conclusion of the first round. As far as the Zouks are concerned, Daren Sammy and Co lost their previous match against the Guyana Amazon Warriors by seven wickets. If they win their next game at the Brian Lara Stadium, Tarouba in Trinidad, they will be facing the Warriors itself in the semis.

As the tournament has progressed, the pitches have become slower. Though batters have found ways to score runs, the bowlers, especially the spinners, have made hay. Batting second should remain the way forward for the teams. The temperature will be around the 30 degrees Celsius mark with chances of rain. The humidity will remain in the high 70s throughout the match.

The Knight Riders have chopped and changed with their eleven after qualifying for the semis. Kieron Pollard, Fawad Ahmed and Sunil Narine didn’t play the last game and it won’t be a surprise if they are rested further. Lendl Simmons’ return to form should come as a massive source of relief for TKR.

Simmons has 210 runs and is also their leading run-scorer, though he struck form after a few failures. Darren Bravo and Colin Munro have been decent with 189 and 207 runs respectively. In bowling, Khary Pierre have been reasonable. Pravin Tambe also bowled brilliantly last time around.

The Zouks have put forth all-round shows without a standout performer. Roston Chase has delivered with both bat and ball, scoring 170 runs with six wickets under his belt. Veteran all-rounder Mohammad Nabi has been excellent as well, notching 135 runs and most aptly, getting 11 wickets.

Scott Kuggelejin and Kesrick Williams have also been up to the mark with a combined tally of 22 wickets. Andre Fletcher and Rahkeem Cornwall need to up the ante as both have underperformed. Javelle Glenn, bowling for the first time in T20s, hasn’t flattered to deceive by any means.

Live Streaming – The match can be streamed online at Fancode. 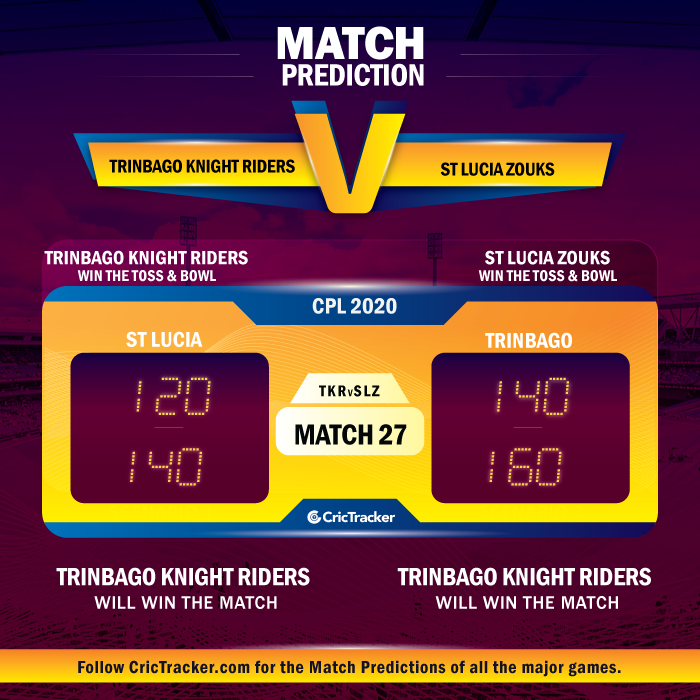