Mohammad Hafeez is a good captaincy pick for your fantasy teams. 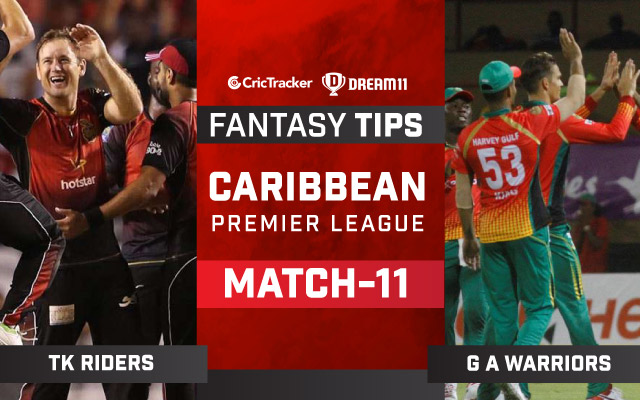 Trinbago Knight Riders will take on Guyana Amazon Warriors for the 2nd time in this tournament. Trinbago Knight Riders have already seen ups and downs in this year’s CPL having won 2 and lost 2 matches. 4-time champions beat St Lucia Kings by 27 runs on Tuesday to claim their 2nd victory. They still placed themselves at 3rd spot in the standings with 4 points.

Guyana Amazon Warriors are not in great shape at the moment having lost two back-to-back matches against St Kitts and Nevis Patriots. Not enough runs on the board were the reason behind the losses. Experimenting with Mohammad Hafeez to open the innings against St Kitts turned out to be masterstroke for Warriors, as the veteran batter didn’t miss out on the opportunity to score runs.

The wicket is on the slower side, it will be difficult for the incoming batters to straight away hit the ball. By looking at the previous matches played anything above 160 is a good competitive on this venue.

Lendl Simmons is yet to make a big impact in this tournament. In 4 matches he has scored 46 runs with the highest score of 25. He just needs one big innings to get back to the form.

Southpaw Shimron Hetmyer has already hit 2 half-centuries in 3 matches in this year’s CPL. He has been very effective at the death and can accelerate the innings once he is set. Overall in 3 matches, he has scored 110 runs at a strike rate of 135.8.

Rahul Dravid will come with a blueprint for Indian cricket for the next 5 or 10 years, reckons Aakash Chopra

Kieron Pollard is a floater who can bat according to the situation. TKR skipper has mustered 110 runs in 4 matches in this tournament at an average of 36.66 with the highest score of 58*.

Sunil Narine is a multi-talented player. He can be used as an opener with the bat and also has the ability to hold one end without conceding easy runs. He has picked up 4 wickets in 4 matches at an economy of under 6 and scored 44 runs with the bat in 3 innings.

Akeal Hosein is the most economical bowler for Knight Riders in this competition. He has picked up 5 wickets in 4 matches at an economy of 4.62 with the best figures of 2 for 17.

Imran Tahir is making the most of the slow surface. In 3 matches so far in this competition, he has picked up 5 wickets at an economy of 5.83.

Tim Seifert has impressed with his big hitting in the last 2 matches where he made scores of 37 and 40*. Overall in this tournament, he has scored 115 runs in 4 matches at an average of 38.33.

GUY vs TKR Must Picks for Dream11 Fantasy Cricket:

Ravi Rampaul is the joint leading wicket-taker in this tournament. He has scalped 9 wickets in 4 matches at an economy of 7.3. You can take a risky call and pick him as your fantasy team captain.

Shoaib Malik hasn’t got enough opportunities in this tournament. He has scored 7 runs in 2 innings so far and hence it’s better to avoid him while making your fantasy teams.