Cricket Australia Awards 2020: Who Won What?

Warner was seen fighting his tears during his acceptance speech after collecting his third Alan Border Medal. 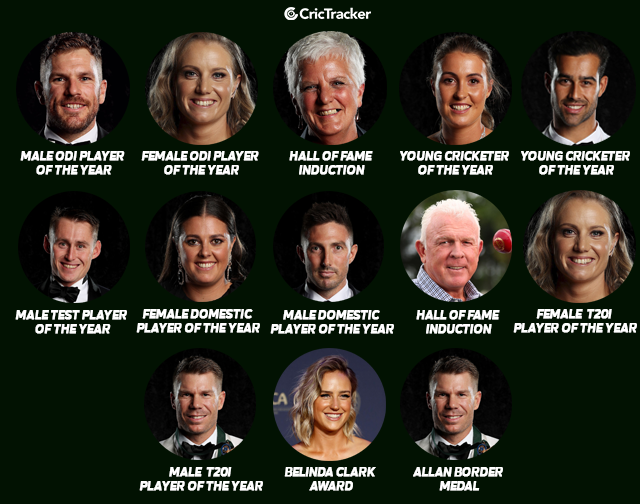 Australia cricket just witnessed its night of nights as the Cricket Australia’s annual awards ceremony took place at Crown Melbourne on Monday. The awards are the celebration of the outstanding achievements of the Australian cricketers in the international and domestic circuits.

Performances from cricketers of both genders and across formats were acknowledged as David Warner won the highest honour of the night, the Allan Border Medal. The night also witnessed women’s legend Sharon Terdrea and former men’s star Craig McDermott being inducted into Cricket Australia’s Hall of Fame.

Male One Day International Player of the Year: Aaron Finch

Female One Day International Player of the Year: Alyssa Healy

Meanwhile, Warner was seen fighting his tears during his acceptance speech after collecting his third Alan Border Medal. He won the medal on the virtue of single-vote lead against Steve Smith. World number one Test bowler Pat Cummins finished third.

The 33-year-old opener polled a total of 194 votes in his favour across the formats while Smith earned 193 votes. Cummins got 185 under his name.

Perry, on the other hand, claimed she was shocked to win her second Belinda Clarke Medal after missing out on both the awards for the T20I and ODI Female Player of the Year to Alyssa Healy.