Babar Azam is the only player with three centuries in 2019 in the Twenty20 format.

The T20 Practice Match between Cricket Australia XI and Pakistan will be played at the Bankstown Oval in Sydney.

This game can be viewed on the Cricket Australia website.

Pakistan’s month-long tour of Australia will start with a 3-match T20I series on November 3rd in Sydney. However, before the series, the visiting team will face Cricket Australia XI on Thursday in a warm-up fixture. Chris Lynn will be leading the CA XI which consists of young faces. Pakistan, the No.1 ranked T20I side, has revamped their squad starting from this tour.

A major change to be seen is Babar Azam taking up the captaincy from Sarfaraz Ahmed who couldn’t find a place in the squad. The Pakistan team is having a tough 2019 as they are fresh of a 0-3 whitewash against Sri Lanka that too in Pakistan. They have lost all three T20I series they played this year having all the 11 they played between 2016 and 2018.

The practice game is expected to be played in perfect Australian summer conditions. Clear skies are forecasted over the Bankstown Oval on Thursday and high temperatures could be recorded.

The Bankstown Oval hasn’t hosted an official Men’s T20 match till date. In the last 18 months, the venue stood host for a One-Day Cup game and a WBBL match. Considering how the two matches went, we can assume the team batting first will be looking 170 as a winning total.

Babar Azam is the only player with three T20 centuries in 2019. He also scored 1492 runs from 36 T20 innings at an average of 45.21 this year; the most T20 runs by any player in 2019. Will Sutherland is expected to bat in top four and will be seen bowling full quota of four overs.

Mohammad Rizwan had four consecutive 30+ scores in National T20 Cup including two fifties. Chris Green could be seen playing a role with the bat in a young batting line-up. Mohammad Amir is well known for his exploits in the warm-up fixtures and could be seen excelling once again. 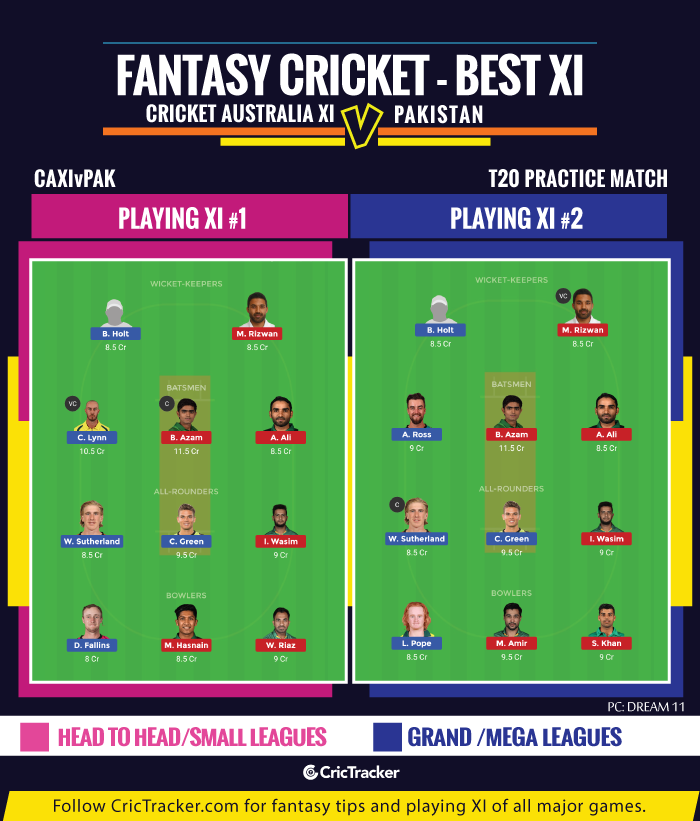 With this game not listed as an official T20, the Pakistan team will have a chance of trying out more than 11 players. It is the reason why we have picked no more than 8 players from their squad in our suggested XIs. All the eight players are likely to bat or ball for the visitors in the match.

Pakistan is expected to start their tour with a comfortable win.