Cricket in 2018: CricTracker fans’ ODI XI of the year

Cricket in 2018: CricTracker fans’ ODI XI of the year

The CricTracker fans had an opportunity to choose their ODI XI of the year through polls on the website.

With 75 per cent wins, India was the most successful one-day international (ODI) team in 2018. The side defended the Asia Cup and registered many other top-notch wins. The year was quite an eventful one for England as well. The Brits recorded nearly 74 per cent wins. There were some nerve-wracking games played throughout the year which left the audience on the edge of their seats.

Strategically, 2018 was a critical one for all the sides. The World Cup 2019 preparations were on and all the teams somewhat came to a conclusion regarding the squads for the mega tournament. MS Dhoni captaining the Indian team in his 200th ODI was one of the most memorable moments of the year. Zimbabwe (26) played the highest ODIs in 2018.

Also, there it was a year to remember for some of the cricketers. These players were instrumental in their team’s success and thus received several laurels. The CricTracker fans had an opportunity to choose their ODI XI of the year through polls on the website. The results for the same are out and here is the fans’ ODI XI of the year.

The successful Indian opening pair of Rohit Sharma and Shikhar Dhawan were chosen by the fans for this ODI XI. This duo registered the second highest opening partnership of the year with 210 runs against Pakistan in the Asia Cup. Sharma was second only to Virat Kohli in terms of the runs scored in the year. In 19 matches, he piled up 1,030 runs at an average of 74.

Rohit hit five tons in the year and scored at a strike rate of over 100. Also, he hit the highest number of sixes (39) in 2018. His partner Shikhar Dhawan was just as good. Even though he didn’t do well in the Tests, he was terrific in limited-overs cricket. The left-hander scored 897 runs in 19 matches at an average of 50 and hit three centuries.

Virat Kohli, without a second thought, will feature in this XI. The 30-year-old was the highest ODI run-scorer of the year with 1,202 runs at a staggering average of 134 and a strike rate of 103. With six ODI centuries and three half-centuries, the Indian captain was truly unbelievable and stunned everyone with his consistency.

Ross Taylor, who was another impeccably consistent performer will follow Virat in this XI. In 11 matches (10 innings), the Kiwi batsman scored 639 runs at an average of 91. Windies batsman Shimron Hetmyer is next in this lineup. He totaled 727 runs in 18 matches at an average of 40. He will take the role of the finisher here and can be used as a floater.

Jos Buttler has had a great 2018 and played a critical role in England’s success. The wicket-keeper batsman is a brilliant limited-overs cricketer and continued his dominance in the year. Buttler featured in 23 out of the 24 games played by England this year, batted in 18 innings and scored 671 runs at an average of 52 and a strike rate of 114.

Shakib Al Hasan is one of the best all-rounders around at the moment. He found enough support for the fans to get to feature in this XI. The southpaw scored 497 runs in 15 games and picked up 21 wickets. Furthermore, his economy rate of 4.48 with the ball is quite commendable.

The fans have picked two spinners and two pacers in their XI. Rashid Khan and Kuldeep Yadav were superb with the ball and finished as the top two wicket-takers in ODIs. While the leg-spinner picked up 48 wickets in 20 games, the chinaman had 45 victims to his name in 19 matches.

Even though they weren’t among the highest wicket-takers, Kagiso Rabada and Jasprit Bumrah were chosen to share the pace duties. It could be largely due to the kind of impact that this duo created that they have found a place in this ODI XI. The South African pacer picked up 23 wickets in 14 games while the Indian sensation accounted for 22 wickets in 13 matches.

Here are the results of the poll 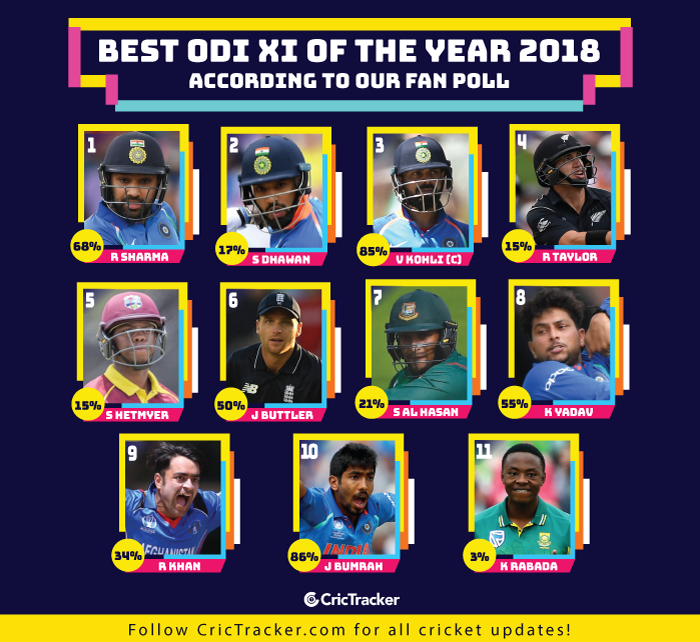 (Note: We have picked this XI purely based on the votes from the fans.)

Get the latest Cricket News and all the Cricket in 2018 articles, Match Predictions, Fantasy Cricket Tips and lots more on CricTracker.com.