British journalist Piers Morgan who has been in the news recently with former Indian opener Virender Sehwag, England’s Kevin Pietersen and former Australian pacer Brett Lee taking pot shots at him on various instances on Twitter. Now that he is enjoying so much hype, Morgan decided to target England’s limited overs skipper Eoin Morgan for his inability to decide on touring Bangladesh. Piers called Eoin a wuss and said he should either show courage and lead the team on tour or give up captaincy.

Eoin Morgan on the other hand believes that he is the captain of the team, the new England team that plays aggressive cricket, that has a lot of courage, that goes out on the cricket ground just to win and having been the skipper who has seen through this transformation he has the right to take the decision he feels is right.

Kevin Pietersen who also at a point felt something similar but the manner in which things have transpired for him suggest that taking it for granted wasn’t probably the smartest of the things. And he wishes to exchange a piece of advice with Eoin.

Meanwhile, Virender Sehwag took the opportunity to knock at Piers Morgan and tell him that two Indian athletes participating in the ongoing Paralympics games in Rio have won medals – gold and a bronze in the long jump event.

Here is the CricToon depicting how things panned out: 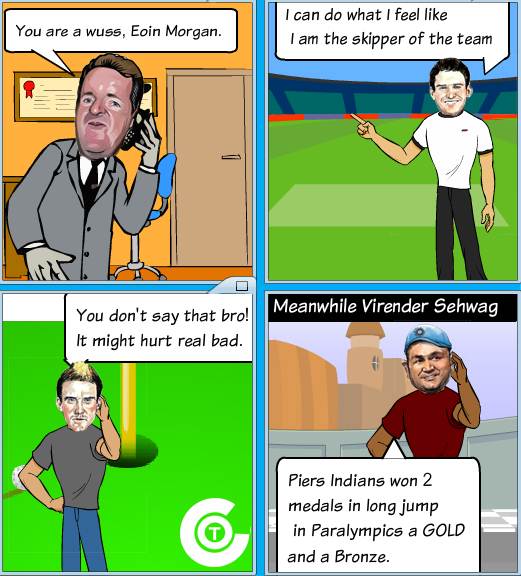