CricTracker fans pick the Test team of the year 2019

CricTracker fans pick the Test team of the year 2019

Polls were conducted on the official Facebook page and the eventual winners are declared.

In 2019, Test cricket was a witness to the ICC World Test Championship getting underway. Even as India are leading the charts with victory in all their matches, Australia are closing in the gap. Tim Paine and Co started the championship, drawling level in the Ashes 2-2. However, they managed to retain the urn. The Aussies then thumped Pakistan and are dominating New Zealand.

India have stamped their authority, staying unbeaten, defeating West Indies, South Africa and Bangladesh. As the year comes to a close, CricTracker fans picked their best Test XI. Polls were conducted on the official Facebook page and the eventual winners are declared. As openers, the duo of Mayank Agarwal and Rohit Sharma feature. Both have scored double centuries in the last few months and are in riveting form. At number three, Steve Smith made the cut.

Smith made his Test return in the Ashes after 16 months and is currently ICC’s number two batsman. Following him is Virat Kohli, who’s at the helm of the rankings. Kohli has also flourished as the leader. Babar Azam has scored three centuries in his last four Tests and he is slotted at number five. In the game where he missed out on a ton, Babar ended with an impressive 97.

Rashid Khan picked over Nathan Lyon as the lone spinner

The fans preferred Quinton de Kock as the keeper ahead of BJ Watling. Among the all-rounders, Ben Stokes was chosen ahead of Ravindra Jadeja. Stokes scored a masterful century in the Headingley Test that helped England snatch victory from the jaws of defeat. There was a close contest between Nathan Lyon and Rashid Khan for the spin-bowling option and the former made the cut.

Rashid was the youngest skipper win a Test match and he accomplished the feat against Bangladesh back in September. The Aussie pace duo of Mitchell Starc and Pat Cummins feature in the list. While Cummins has been playing regularly, Starc has been a tad in and out of the team.

But the latter has done well in the chances he has gotten. Stuart Broad, who made David Warner jump like a cat on a hot tin roof, has been picked to partner the likes of Cummins and Starc. 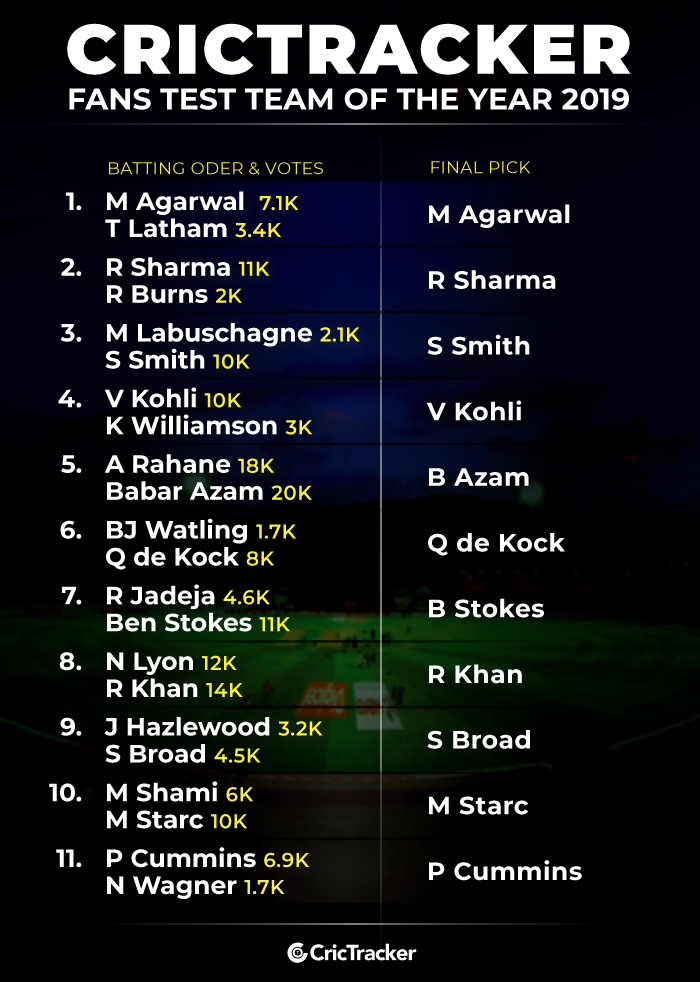