Theunis de Bruyn struck a 38-ball 74 during the tournament opener for the Titans.

The defending champions Titans will face Cape Cobras on Wednesday in search of their first win in the 2019 edition of the CSA T20 Challenge. In the tournament opener, the Titans posted a huge total of 216/5 from 20 overs in the game played at the SuperSport Park in Centurion. The chase of Warriors lasted only six overs due to rain interval when they were 60/0, four runs ahead of the DLS par score.

On the other hand, the Cape Cobras had an interesting game against the Lions which they won by five runs. Aviwe Mgijima and Vernon Philander added 58 from 5.1 overs for the 7th wicket from pushing the total to 169/8. The Lions scored 39 from 12 balls when they needed 47 from 3.1 overs to bring down the equation to 8 off 7. However, the hosts scored only two runs from those 7 balls to end up on the losing side.

The 6th match of the CSA T20 Challenge 2019 will be played between Titans and Cape Cobras at the Willowmoore Park in Benoni.

The Willowmoore Park in Benoni hasn’t hosted a Twenty20 game since the start of 2017. The scheduled T20I between South Africa and Zimbabwe was abandoned due to rain. The recent most T20s at this venue have been high scoring ones. The same could continue in the game between the Titans and Cobras.

Matthew Arnold has replaced Wandile Makwetu in the Titans squad.

Theunis de Bruyn has carried his rich form with the bat from the Momentum One-Day Cup. De Bruyn scored crucial runs during that tournament and also recorded his career best of 183 while opening the innings. In the first game against the Lions, Theunis smacked a 38-ball 74 with four fours and five sixes. 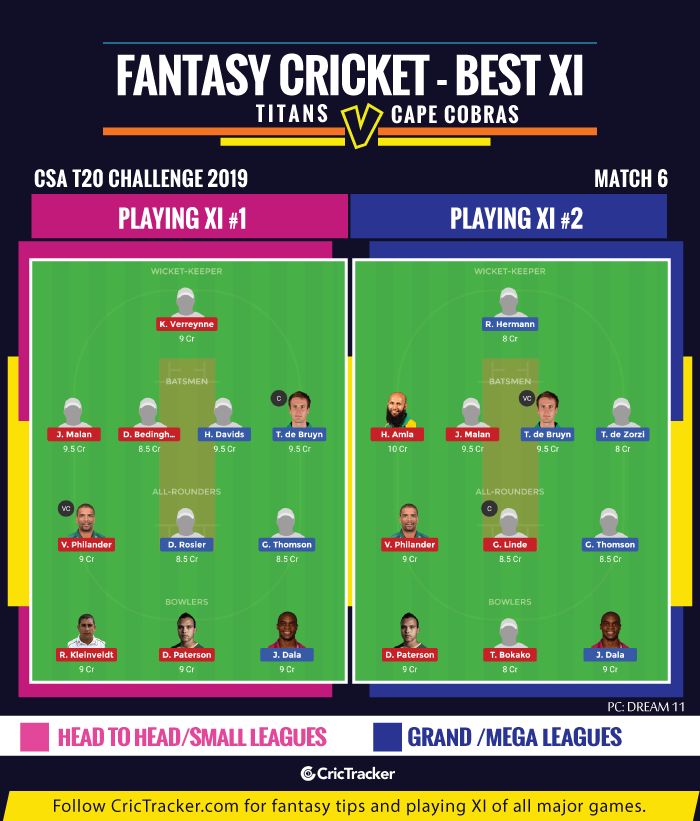 The all-rounder category is filled up with performing players. As many as five players earned between 18 and 27 points during their respective first matches of the tournament. Considering the experience of the players and their recent form, the best three from this category will be Vernon Philander, George Linde and Grant Thomson.

The defending champions Titans are expected to open their points tally by defeating the Cape Cobras.