Kolkata Knight Riders managed to defeat the Chennai Super Kings by 10 runs earlier in the tournament. 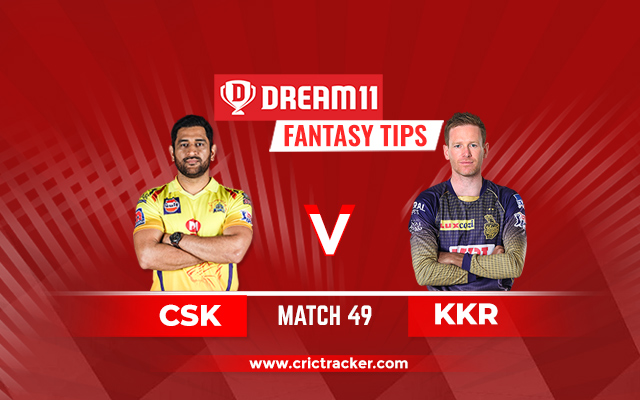 CSK won the toss and opted to bowl first

The 49th match of the Indian Premier League (IPL) 2020 will be played between Chennai Super Kings and Kolkata Knight Riders at the Dubai International Cricket Stadium, Dubai.

The Chennai Super Kings (CSK) could be the only team to be knocked out the tournament at this stage. But they can still be the party spoilers for the other teams. This is something they will experience for the first time ever in the IPL and would want to have some fun towards the back end of the tournament. They got the better of the Royal Challengers Bangalore (RCB) in their last game and will look to drag down the Kolkata Knight Riders (KKR) with them this time around.

The KKR have six wins and six losses in 12 games thus far and are coming off a loss against the Kings XI Punjab (KXIP) in their last match. This being their penultimate game in the league stages, they would want to register a big win and keep themselves in contention for the playoffs. They managed to defeat the Chennai Super Kings by 10 runs earlier in the tournament.

The weather will be quite pleasant and the players should enjoy the same. The skies will be clear while the humidity levels will rise up slightly as the game progresses.

After a couple of low-scoring games, the Dubai International Cricket Stadium witnessed a total in excess of 200 in the last match. Batting second has usually been tough here when the targets are over 170. The team chasing would want to restrict their opponents to a score around 150.

173 (Thus far at this venue in this tournament)

Shubman Gill, with 378 runs in 12 matches, is the leading run-scorer for his team. He registered three half-centuries in the tournament.

Faf du Plessis accrued 401 runs in 12 games in this tournament and has been one of the standout performers for CSK.

Sam Curran scored 173 runs in 10 innings and accounted for 13 wickets in the 11 innings that he bowled.

Ambati Rayudu scored 291 runs in 9 innings and has looked to be in very good touch with the bat.

Nitish Rana has come up with a few impressive performances in the tournament. He scored 265 runs in 12 games thus far.

The tracks in Dubai are offering great assistance to the spinners. Rashid Khan got turn and bounce in the last match. Thus, you should have someone like Imran Tahir in your team.

Kolkata Knight Riders are predicted to win this match.