The Sunrisers have only won three out of their 10 matches against the Super Kings.

The Chennai Super Kings (CSK) started with a victory, but then slumped to a couple of hefty defeats against the Rajasthan Royals (RR) and the Delhi Capitals (DC). The victory also pushed them down to the bottom of the points table with a net run rate of -0.840.

Their next match is against David Warner’s Sunrisers Hyderabad (SRH) on Friday, October 2 at the Dubai International Cricket Stadium. Overall, CSK have dominated SRH on head-to-head count. However, this time, the Sunrisers look a tad more balanced than the Yellow Army.

In the last game against the Delhi Capitals (SRH), SRH registered their first points in the tournament, winning by 15 runs. Kane Williamson’s return from injury also bolstered their batting lineup and the New Zealand skipper struck gold from the word go.

The pitch in Dubai has gotten better for batting over the time period. Teams, batting first have gotten a significant amount of advantage on the surface. The spinners are most likely to come into play.

The batter will have to depend on singles and doubles as clearing the long boundaries may not be all that easy. The temperature will be around 35 degrees with dew likely to play a major role.

Playing Combinations for CSK vs SRH

Shane Watson hasn’t had the best of IPLs, having scored only 51 runs at an average of 17. But his numbers against SRH make him a force to reckon with in the next match.

In 16 matches, the right-hander has 523 runs at an average and strike-rate of 37.36 and 150.29 respectively. He has three fifties and a century with a top score of an unbeaten 117. The Sunrisers can’t afford to let him settle.

David Warner hasn’t been at his best, but with scores of 36 and 45, he has started to find his rhythm. The left-hander, against CSK, has six fifties from 14 matches, showing that he likes their bowling attack.

Overall, he has 445 runs at an average and strike-rate of 31.79 and 139.50 respectively. The SRH batting depends heavily on the southpaw and it goes without saying that he will be a key player.

CSK vs SRH Head to Head 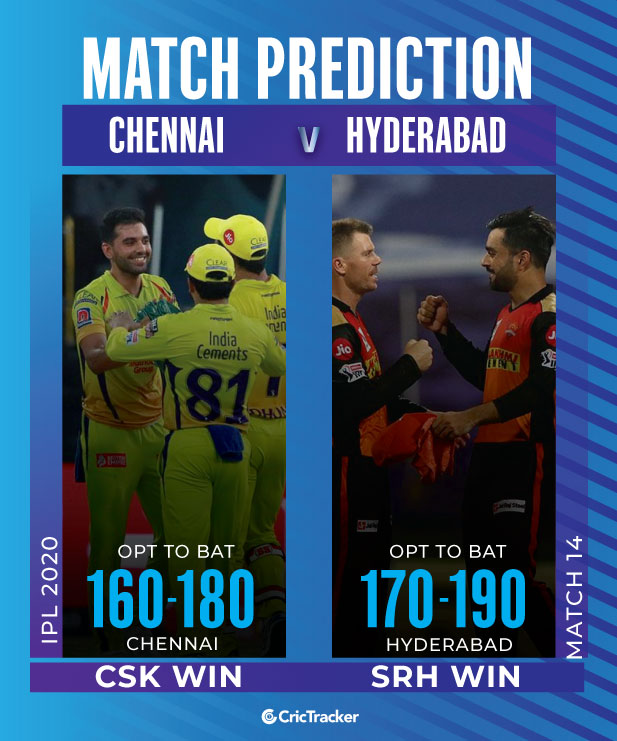