The Viiking was the only team to whom the Stallions didn’t lose in the league stage.

Jaffna Stallions’ campaign in the 2020 Lanka Premier League has been a tale of two halves. The team, led by Thisara Perera, started with four victories on the trot, helping them become the first team to qualify for the semis.

However, in their last four matches, they haven’t seen the face of a victory, losing three games while their game against Dambulla Viiking was called off due to rain. In fact, the Viiking was the only team to whom the Stallions didn’t lose in the league stage.

Going into the second semi-final on Monday, the Stallions can take heart from that and cease their losing streak. The Viiking, on the other hand, lost only two of their games in the first round and finished second on the table with 11 points. The Viiking lost their last match to Colombo Kings on Friday.

The pitch in Hambantota has been an excellent one for batting. Run-making hasn’t been tough and it can be comprehended from the average first innings score.

Though the chasing team won in the first semi-final, sides would be better off setting a target and then exert pressure on the opposition. The conditions will be cloudy with no chances of rain. The temperature will be around 27 degrees Celsius.

Playing Combinations for DAM vs JAF

Niroshan Dickwella was getting a lot of 20s in the first half of the tournament. But the 65 he made against Galle Gladiators gave him a whole lot of confidence. He has given the Viiking plenty of brisk starts.

In eight matches, the left-hander has scored 241 runs at an average and strike-rate of 34.42 and 146.95 respectively. In the must-win crunch game, Dickwella would be hoping for another decent knock.

Wanindu Hasaranga has played a crucial role for the Stallions in the tournament. He is currently the leading wicket-taker for his team with 13 wickets to show for his efforts. He also has the best economy rate- 5.48- among the other bowlers in his team. 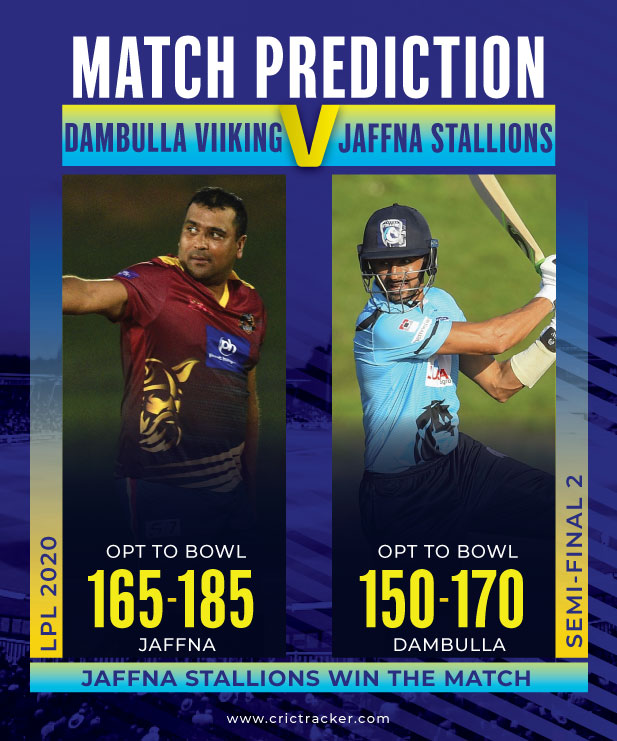