Udara Weerasinghe and Kieran Toner have been picked in 95 and 85 per cent fantasy teams, but they are not in the playing XI, so do not pick them in your teams.

The Round 9 match of the Darwin and District ODD is all set to be played between the Palmestron Cricket Club and the Waratah Cricket Club at the Cazalys Oval.

Sunday will see the round matches of the Darwin and District ODD being played. Coming to this match, the two clubs would be at varying level of self-confidence. On one hand, the Waratah CC coming off a win against the Pint Cricket Club will be riding high on confidence, while the Palmestron Cricket Club will have some things to work on as they suffered a loss by a margin of 79 runs, in the previous match, which they played against the Darwin Cricket Club.

Waratah CC will look to make the best of the momentum that they are in and continue their winning run, while Palmestron CC will look to get the better off their opponents and bounce back with a win.

The match may face hindrance due to the rainfall that is predicted for Sunday. The chances of precipitation are 50 per cent and the temperatures are expected to be around the 24 degree Celsius mark.

The pitch here is a bowler’s paradise. So, the batsmen will be required to get the best of their abilities on the ground, if they want a chance to score runs against the bowlers here.

Udara Weerasinghe will not be playing for the Warath CC, while Kieran Toner has been left out of the Palmerston CC team.

For the Waratah CC, Isaac Conway has been in great touch with the bat. He is the highest run-getter for his team. In the 7 matches that he has batted in, he has scored 304 runs at a staggering average of 50.67. James Seymour too looks in as good form as his teammate, Isaac. Seymour has scored 279 runs in 7 matches and has a strike rate of 85.8 and an average of 39.86. Seymour’s bowling has also been impressive as he has managed to get 10 wickets to his name too.

In the Palmestron camp, the batting attack is being led by Alex Bleakley who has scored 151 runs in 6 innings, which also includes an unbeaten century knock. He looks in great touch with the bat. He has also been doing well with the ball in hand, as he has taken 11 wickets also while maintaining an economy rate of 3.76. Hamish Martin too has done well with the ball, taking 10 wickets in the 7 matches that he has played. 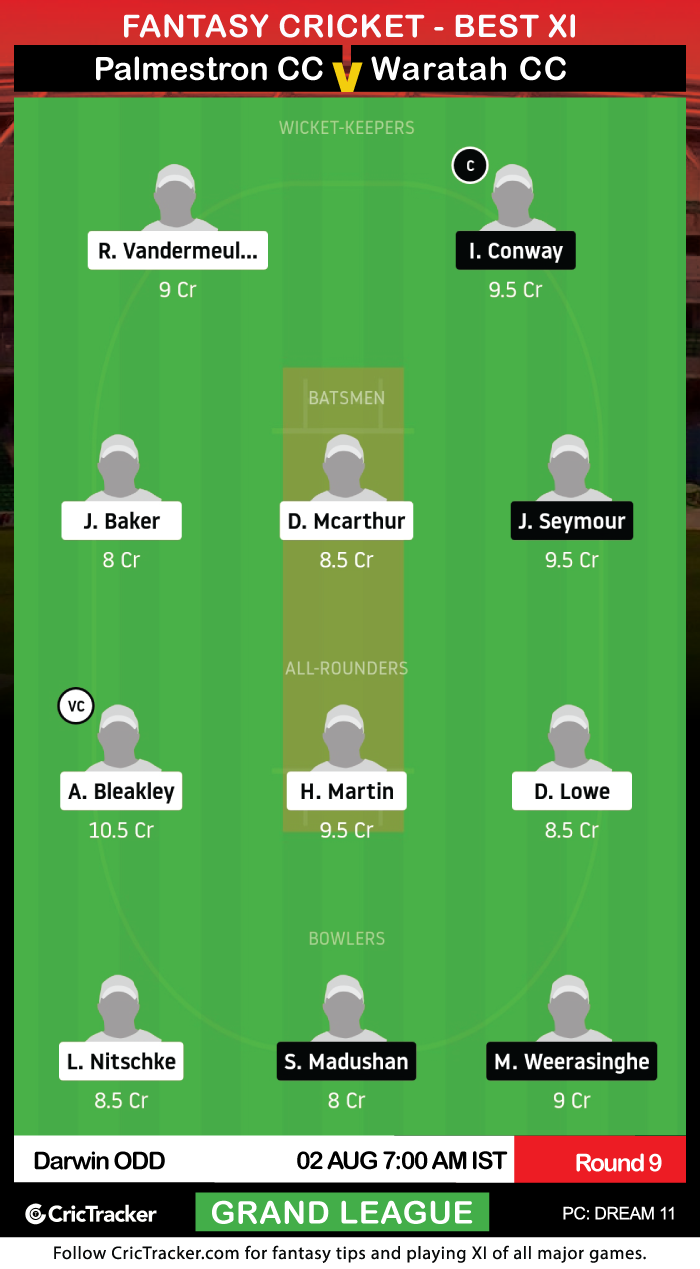 Udara Weerasinghe and Kieran Toner have been picked in 95 and 85 per cent fantasy teams, but they are not in the playing XI, so do not pick them in your teams.