Joel Logan picked 10+ wickets in Darwin and District ODD tournament but he will not play this game and omit him in your fantasy team. 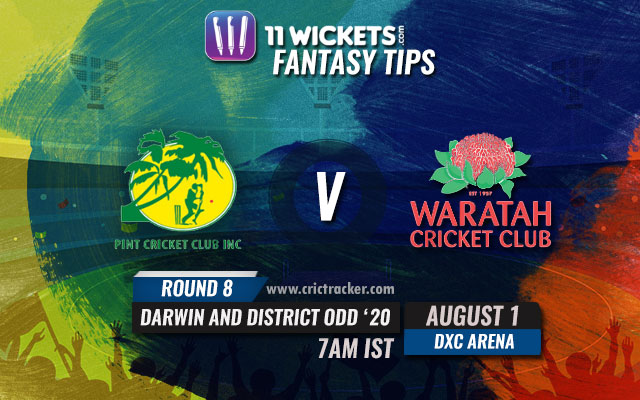 The Round 8 match of the Darwin and District ODD between Pint Cricket Club and Waratah Cricket Club will be played at the DXC Arena (MCG) Oval 1.

Round 8 of Darwin and District ODD will commence on Saturday. The Pint CC won their last match quite comfortably by seven wickets against Nightcliff CC. The Waratah CC didn’t play the last round and they are coming after a two-week break.

The surface at the DXC Arena has got better to bat in the last two One-Day matches. Pint CC scored 174 and defended in one of the matches while the team gunned down 225 easily in the previous outing.

Joel Logan is not in the selected team for Pint CC for this match.

For Pint CC, Tim Garner is their best player having scored 228 runs in six matches. Manenti is a decent bowler with 11 wickets to his name. Richard Oliver, batting at 3 or 4, is in decent form having scored 95 runs in last two matches. Isaac Conway is one of the consistent batsmen for Waratah CC.  James Seymour has continued his good form from round 4 and scored 57 runs in the last match. Udara Weerasinghe has picked 15 wickets thus far in the tournament.

Madura Weerasinghe has scalped 8 wickets in last four matches. Samindara Madhushan scored 24 runs and  1/20 in 7 overs in the last match and can be a good pick for this game.

Joel Logan picked 10+ wickets in Darwin and District ODD tournament but he will not play this game and omit him in your fantasy team.