In their previous meeting, the Capitals got the better of CSK in a comprehensive manner.

Delhi Capitals (DC) have marched ahead in the 2020 edition of the Indian Premier League (IPL). The team, led by Shreyas Iyer, are one of the strong contenders to finish atop the points table after the league stage. They already have six victories up their sleeves from eight matches.

In their previous match, the Capitals got past the Rajasthan Royals (RR) by 13 runs at the Dubai International Cricket Stadium. They will next be facing the Chennai Super Kings (CSK) on Saturday, October 16 at the Sharjah Cricket Stadium.

Though in the history of the league, the yellow brigade have dominated them, this time, it’s DC, who are in a better rhythm. However, CSK would go into the next game with a positive frame of mind. It’s because they are coming off a 20-run victory over the Sunrisers Hyderabad (SRH).

The pitch in Sharjah has been excellent for batting without a shred of a doubt. The short boundaries have kept making life difficult for the bowlers. However, in the last few games, even the spinners have come into play, putting a lid on run-scoring.

It means the strip has shown signs of slowing down. The temperature will be around 31 degrees Celsius. The humidity will be in the mid-20s.

Playing Combinations for DC vs CSK

Kagiso Rabada has been a tough nut to crack in the ongoing edition of the IPL. Having picked up as many as 18 wickets, he is a country mile away from Jofra Archer, who’s placed second in the list of Purple Cap holders.

It won’t be a surprise if he stays at the top right throughout the tournament. Against the Super Kings, the Proteas speedster has picked four wickets from only 7.4 overs.

Faf du Plessis, thus far, has been the standout batsman for the Super Kings in the tournament. In eight games, he has 307 runs at an average of 51.16. However, he has scored only 25 runs in the last three matches, showing a slight dip in form.

He couldn’t open his account against the Sunrisers. In his last game against the Capitals, du Plessis scored 43 and that should give him some confidence.

DC vs CSK Head to Head 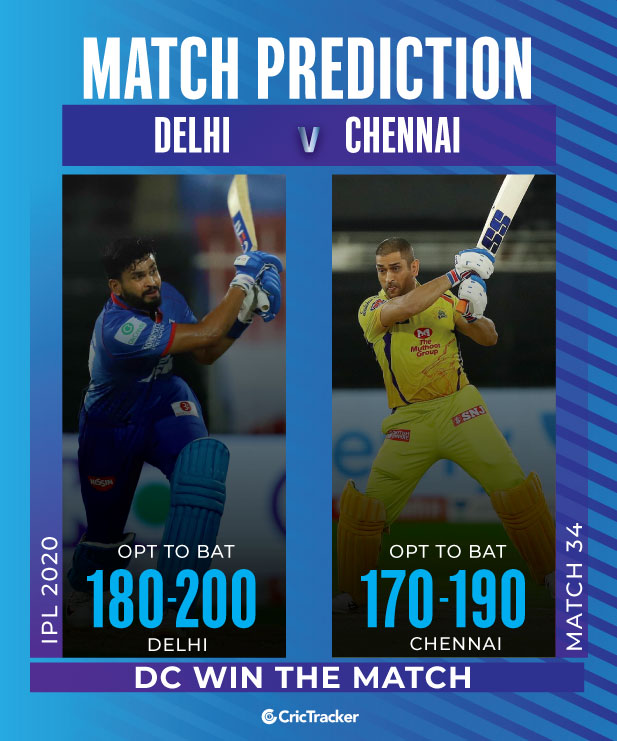