The Knights have lost all their four matches against DC outside India.

Delhi Capitals (DC) started the 2020 Indian Premier League (IPL) with back-to-back wins, but went down to the Sunrisers Hyderabad (SRH) by 15 runs. However, with a net run rate of +0.483, Shreyas Iyer and Co are sitting pretty at second in the points table.

Their upcoming match is against the Kolkata Knight Riders (KKR) in the second of Saturday’s doubleheader at the Sharjah Cricket Stadium. The Dinesh Karthik-captained Knights, on the other hand, are coming off a thumping 37-run victory over the Rajasthan Royals (RR) in Dubai and must be high on confidence.

The victory pushed them up from number seven to the second position in the table. Going into the game, Capitals may have an upper hand, bearing in mind that KKR have lost all four games against them at neutral venues.

The pitch in Sharjah has been a bowler’s graveyard, to say the least. Every other team has touched the 200-run mark showing that the batsmen have had it easy on the surface. The short boundaries haven’t made life easier for the bowlers.

Chasing should be the way forward in Sharjah. The conditions will be warm with the temperature around 33 degrees and humidity in the mid-60s.

Playing Combinations for DC vs KKR

Prithvi Shaw, apart from his fifty against CSK, has strained in this IPL. But keeping in mind his potential, it’s a matter of time before he shows his class. Against KKR, he doesn’t have the worst of numbers.

Andre Russell can cross the biggest of boundaries with his power-hitting. In the 2020 IPL, Sharjah has witnessed a six being hit every eight balls. Hence, if Russell finds his rhythm, the balls could appear on the road.

DC vs KKR Head to Head 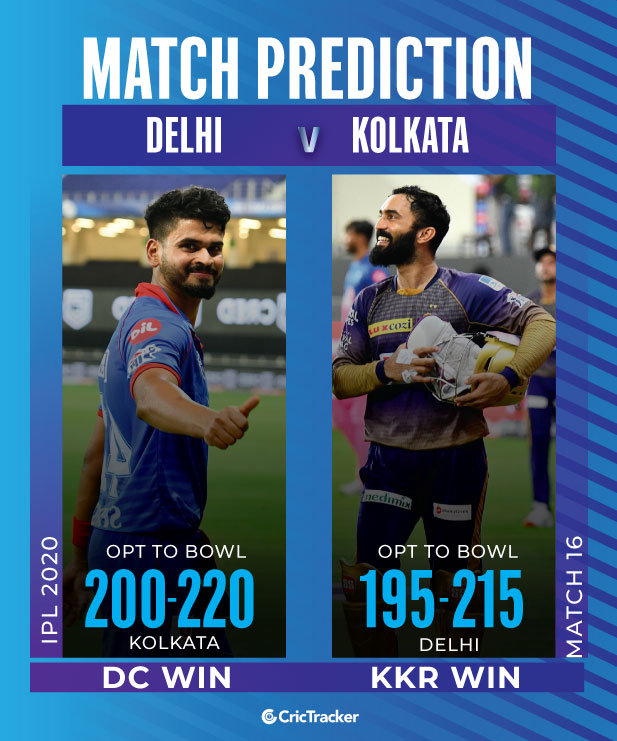