Mayank Agarwal has a batting average of 65.79 in List A cricket since the start of 2018.

The 2nd game of the Deodhar Trophy 2019-20 will be played between India A and India C at the JSCA International Stadium Complex in Ranchi.

The Deodhar Trophy 2019-20 started off with India B giving a thumping to the India A team. The strong India B team posted a huge score of 303/6 thanks to centuries from Baba Aparajith and Ruturaj Gaikwad. The duo added 159 runs for the 3rd wicket before Ravichandran Ashwin provided the breakthrough. The off-spinner recorded figures of 2/40 in his 10 overs and was his team’s best bowler.

Rush Kalaria and Mohammed Siraj took wickets at key intervals to breakdown the chase. Skipper Hanuma Vihari added fifty-run stands with Amandeep Khare and Ishan Kishan but none of them scored at the required rate. To keep themselves alive in the race of final, India A has to defeat India C on Friday. The Shubman Gill-led team has quite a few experienced players and look stronger.

The JSCA Stadium in Ranchi is expected to have clear weather for the 2nd game on Friday. However, there will be clouds at periodic intervals which won’t bring the rain.

The match on Thursday explains exactly how the Ranchi track has played in the last five years. The pitch gets slower as the match progress and scoring will become extremely tough for the chasing teams. Any targets in excess of 250 are going to be unachievable unless some brilliant batting performances.

Sandeep Warrier suffered an injury while fielding on Thursday and didn’t come out to bat. However, he is expected to recover for the game on Friday.

Hanuma Vihari continued his good show in the Deodhar Trophy as he scored four fifties in seven innings in this competition since 2018. Players like Ravichandran Ashwin and Axar Patel are likely to have good outings due to the Ranchi surface. Shubman Gill had quite games in the One-Day format recently but is expected do well here. Surya Kumar Yadav averaged 113 during the VHT 2019/20 scoring two fifties from four innings. Dinesh Karthik scored four fifties from nine innings during the same tournament.

Mayank Agarwal’s List A record in the last 2-3 years makes him assured as captain or vice-captain for every domestic one-day match he features in. 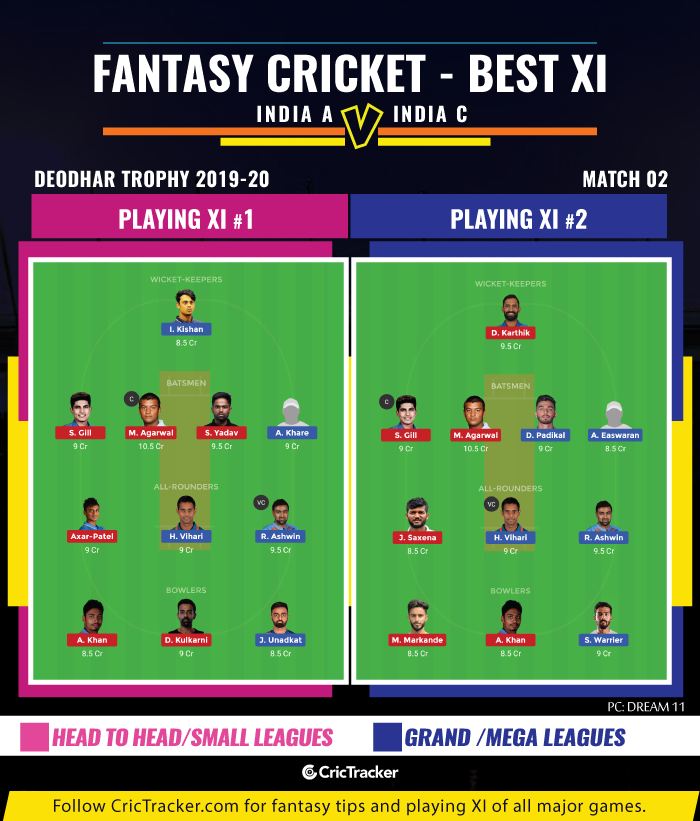 Considering how the pitch played during the first game, it will be ideal to pick players from the team batting first more. The India ‘A’ players especially struggled in the slow conditions. However, India ‘C’ players might do slightly better due to their exposure to a higher level.

India C is expected to defeat India A in this game and qualify for the final.