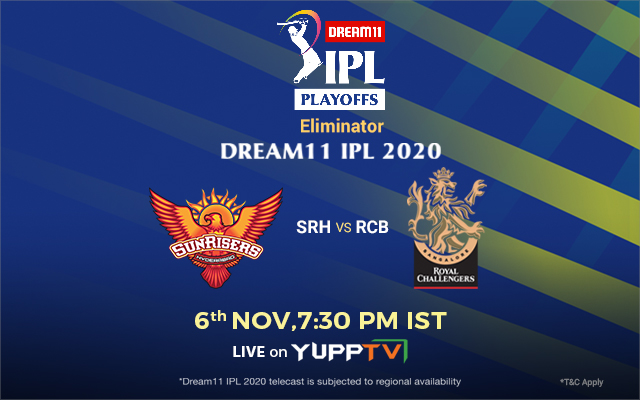 The Eliminator match between the third and fourth position contestants of the Dream11 IPL 2020, Sunrisers Hyderabad and Royal Challengers Bangalore is scheduled today in the Sheikh Zayed Cricket Stadium, Abu Dhabi. The table-toppers Mumbai Indians won the Qualifier-1 against Delhi Capitals to enter the Finals for the 6th time. Whoever wins the Eliminator match will compete against Delhi Capitals in the Qualifier-2 to gain an entrance into the final match of IPL 2020 to play against Mumbai Indians.

SRH managed to make it to the finals in 2018 but had lost the trophy to the Chennai Super Kings. In 2019, the team lost to Delhi Capitals in the Eliminator match and ended up fourth in the tournament. This year, SRH managed to make it to the playoffs again, but will it be able to push through to the Qualifier-2 and then to the finals? That is a question for the future.

RCB had been in the finals in 2016 where it lost the trophy to the SRH team. Since then, the team has struggled even to enter the playoffs. RCB is one of the most popular teams in IPL and has amassed a huge fan base across India. The team is led by current Indian Captain Virat Kohli and has star players like AB de Villiers. Though had its ups and downs this year, the team had managed to make it to the playoffs, and how it will perform in the Eliminator match today is a mystery.

Let us analyze the winning chances of each team

Sunrisers Hyderabad made it to the finals and won the Trophy by defeating Royal Challengers Bangalore in 2016. The team then made it to the finals again in 2018 and managed to make it to the playoffs in 2019. In 2020, SRH won one match and lost one to the RCB team in the leagues. While this may not make any difference to the team’s morale, the fact that it had defeated the RCB team in the final in 2016 and that it had defeated the strongest team Mumbai Indians in the last league match of IPL 2020 by 10 wickets may act as a confidence booster providing a psychological upper hand.

SRH comprises of some of the best national and international players like David Warner (C), Jonny Bairstow, Manish Pandey, Kane Williamson, Rashid Khan, Sandeep Sharma, T Natarajan, Jason Holder, etc., who performed fabulously throughout the tournament. With these kinds of players who are in great shape, the team might be able to defeat RCB tonight.

RCB has been waiting for the opportunity at winning the trophy since 2016 when it lost it to the SRH team. The team has been through three seasons without even entering the playoffs and this opportunity might help them get back at every loss that they had experienced in the past. Though RCB’s record against SRH is not as good, the team comprises of great players like Ab de Villiers, Devdutt Padikkal, Yuzvendra Chahal, Aaron Finch, Shivam Dube, Chris Morris, Mohammed Siraj, etc.

The team has been performing well in the current season and would not think to let go of the one chance that it had gained after years. Young players like Padikkal has been performing fantastically in the season. He is currently among the highest run-scorers for the team alongside Virat Kohli and Ab de Villiers. Yuzvendra Chahal is among the highest wicket-takers, and Chris Morris and Mohammed Siraj are fully capable to offer the well-needed support.

Looking at the current stats, the team might be able to push through the eliminator to reach the Qualifier-2. But this is IPL, and unpredictability is the one element that it is famous for.

Watch Dream11 IPL 2020 Eliminator match- Royal Challengers Bangalore vs Sunrisers Hyderabad on YuppTV from select regions. You can watch the IPL 2020 Playoffs and the Final Live on YuppTV by subscribing to any of the yearly packs.