Ali Hassan Sittar has 37 wickets from 43 domestic T20s where he also chipped in with 270 runs. 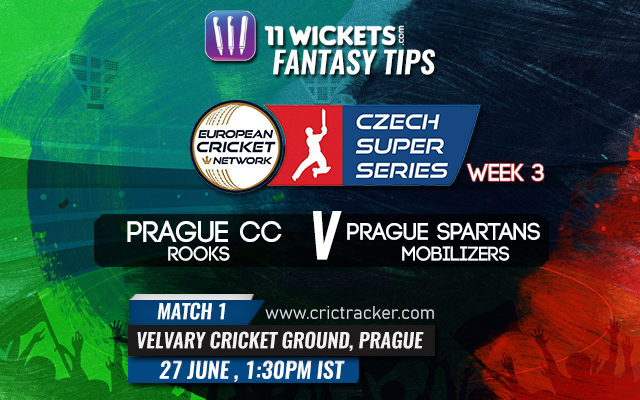 The 1st match in the Week 3 of 2020 ECN Czech Super Series T10 will be played between Prague CC Rooks and Prague Spartans Mobilizers at the Scott Page Field in Prague.

The Scott Page Field will host the Week 3 of the Czech Super Series that begins with the faceoff between Prague CC Rooks and Prague Spartans Mobilizers. Prague Spartans Mobilizers, led by Suresh Babu Kuramboyina will have an edge in this game due to the all-rounders they have in their squad. On the other hand, the Rohit Deshmoyni-led Prague CC Rooks are likely to suffer in the absence of key players which was announced only on the eve of the match.

The first match of this tournament could well be under clouds and a possibility of showers.

The Czech Super Series has been producing moderate totals thus far quite opposed to the T10 competitions in other European countries. The wet weather during the first two weeks could be a reason and the 3rd week could also be on the same lines.

Vaibhav Naukudkar will open the batting for the Spartans and help them score quick runs early on. He can also bowl some tight spin bowling and earn a couple of wickets. The veteran bowler Rohit Deshmoyni has picked up a total of 127 wickets across the 98 T20 matches in the Czech domestic circuit.

Ali Hassan Sittar has 37 wickets from 43 domestic T20s where he also chipped in with 270 runs at an average little under 15. Vignesh Mohan Kumar has taken nine wickets across 15 domestic T20s at an economy less than seven. He is also known for his contributions with the ball.

Prague Spartans Mobilizers is expected to kick start the tournament with a comfortable win.