The 118th match of the ECS T10 2021 will be played between Badalona Shaheen and Trinitat Royal Stars on 11th March at Montjuic Olympic Ground in Barcelona.

On the last day of the league group matches, Badalona Shaheen will take on Trinitat Royal Stars in the 118th match of the ECS T10 2021 on Thursday. Badalona Shaheen will be playing 2 matches on the penultimate day of the competition and will need to win both to stay alive in the competition. They have had a good tournament so far till now, winning 6 of their 8 matches played. They have won their last 4 matches on the trot and need to continue the same to go through to the knockout stages. At present they are at top of the table in the Group D standings with 12 points and having a healthy run-rate of 3.775.

Meanwhile, Trinitat Royal Stars are also in the race for the knockouts, but they will need to win their remaining 3 matches to book a place in the semi-finals. So far, they have won 5 of their 7 matches played and have lost the other 2 matches. They have a slight upper hand against the Badalona Shaheen since they beat them earlier in the tournament by 2 wickets. Right now they are in the third spot in the standings with 10 points and having a net run-rate of 1.589.

It will be partly cloudy in Barcelona with the temperature ranging between 16 and 17 degrees Celsius in the afternoon. The humidity will be 67 per cent and there is no chance of precipitation for this match.

One of the main specialities in this competition is the surface used. We have seen huge run fests throughout the tournament and the surface hasn’t changed a bit. It has provided a tremendous amount of assistance for the batsmen to score runs quite easily and is likely to do the same for the remaining two days of the tournament as well.

Sarmad Ali is the highest run-getter for Badalona Shaheen in this tournament. He has accumulated 226 runs in 8 matches at an average of 28.25 with an excellent strike rate of 248.35 and his highest score is 75.

All-rounder Hamza Saleem has picked up the most wickets for Badalona Shaheen with 9 wickets in 8 matches at an impressive economy of 5.5 runs per over. With the bat, he has scored 104 runs in 8 matches at an average of 14.85 with a strike rate of 212.24.

Muhammad Ali Meer played an absolute blinder in the previous match against Hawks, scoring 48 runs from 21 balls. Overall, he has scored 179 runs in 7 matches at an average of 35.8 and a strike rate of 173.78. With the ball in in hand, he has picked up 5 wickets at an economy of 8.57 runs per over.

Muhammad Fiaz Haider remained unbeaten on 43 from 21 balls in the successful run-chase against Hawks. Overall, he has scored 132 runs in 7 matches at a strike rate of 185.91 with the highest score of 70*.

Aqeel Ansar is the leading wicket-taker for Trinitat Royal Stars picking up 11 wickets in 7 matches at an economy of 6.57 runs per over, with the best bowling figures of 4/8. 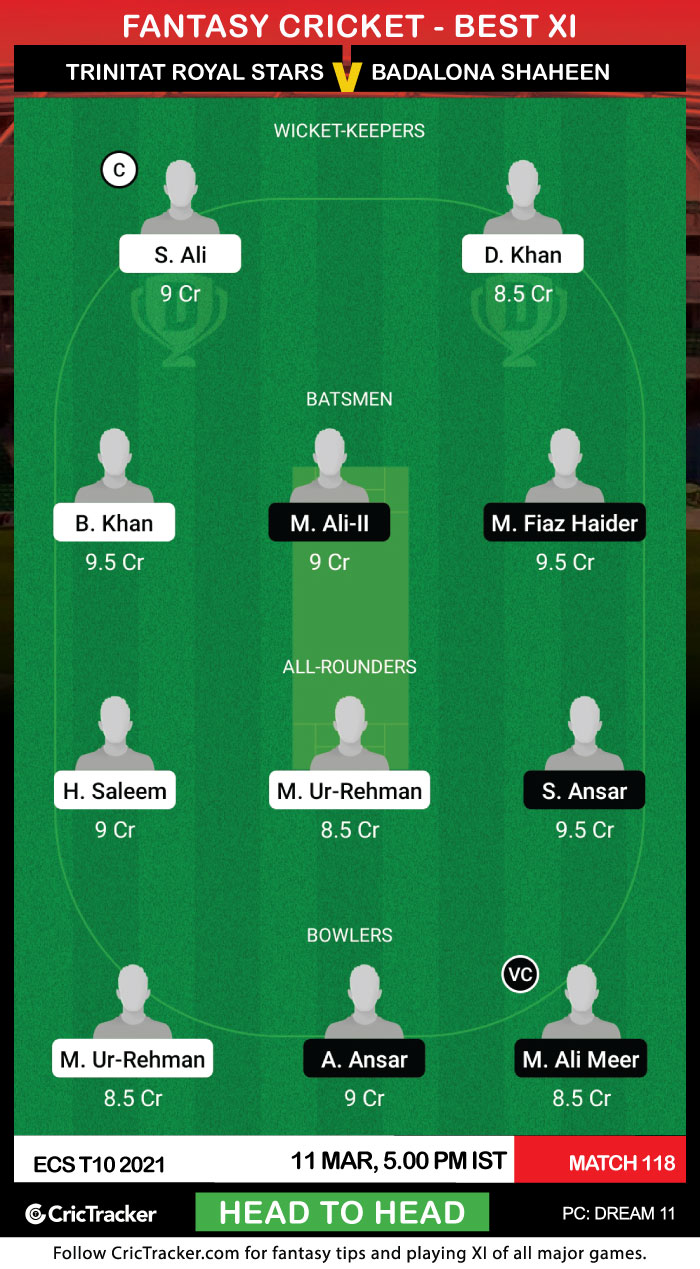 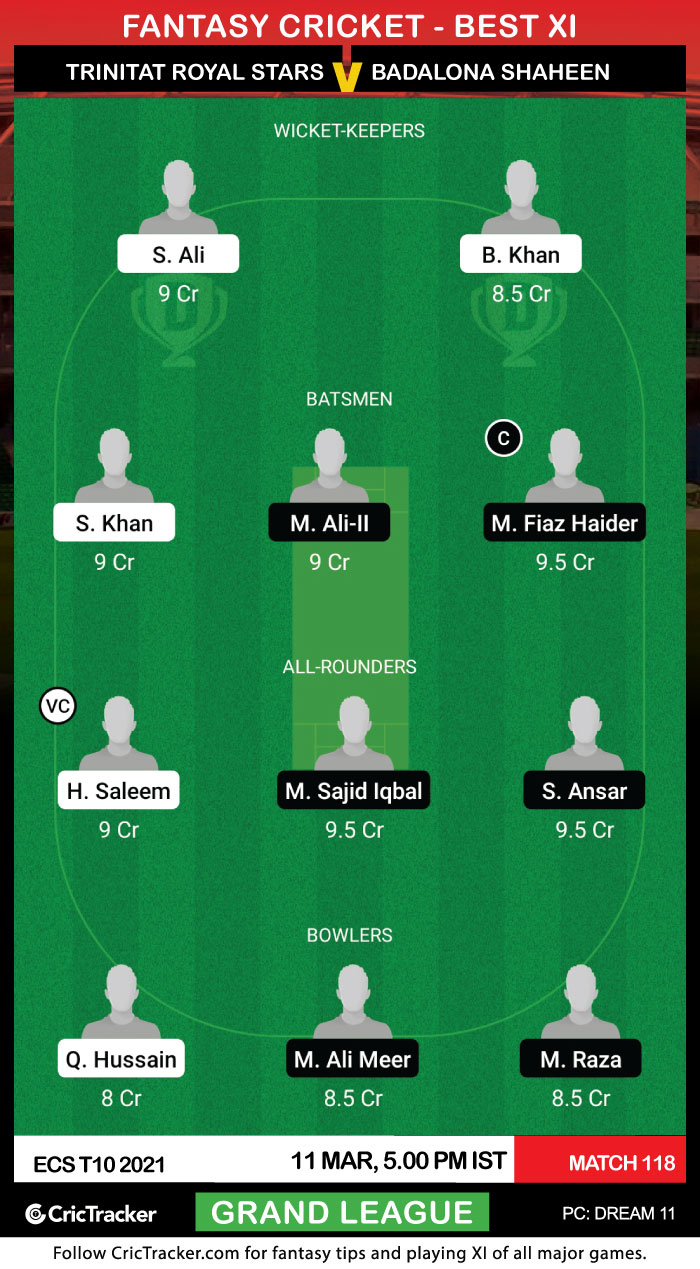 Muhammad Ali Meer is listed under the bowler’s category but he bats at the top-order and has the potential to win matches for his team with the bat. He can be a good captaincy of vice-captaincy pick.