The bowling attack of Limassol Gladiators conceded heaps of runs in the first two games. 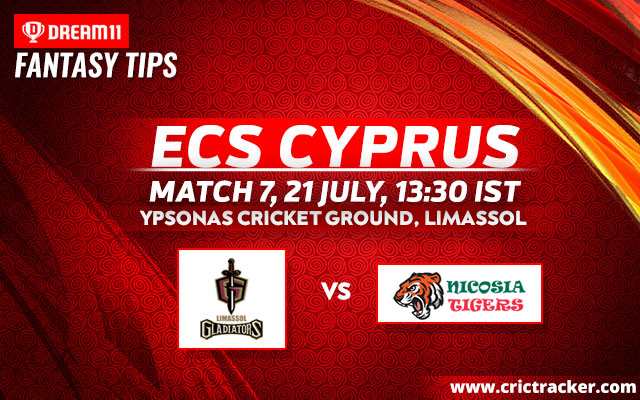 The 7th match of the ECS Cyprus T10 between Limassol Gladiators CC and Nicosia Tigers CC will be played at Ypsonas Cricket Ground.

After suffering two massive losses on the opening day of the ECS T10 Cyrpus League, Limassol Gladiators CC will look to register their first win of the season against Nicosia Tigers CC. Even the Tigers lost their first game of the tourney and they’ll look to improve their performance.

There are no predictions for rain in Cyprus as the fans will witness a full T10 match. The temperature will stay in the range of 30 degrees Celsius.

The batsmen have enjoyed batting at this venue, with the teams batting first scoring a 100 plus total in three of the first four games.

Skipper Noman Zeb had top-scored for the Gladiators in their previous match. He opened the batting and scored 44 runs off 23 deliveries. Bilal Ahmad had scored a 19-ball 27 against Cyprus Moufflons CC in his first match. He could be another good option for captaincy.

Shabbi Ul Hasan was the best bowler for Tigers in their first match. In an innings where they conceded 127 runs, Hasan gave away only 17 runs in his two overs and even picked up two wickets. From the batting department, Yasir Khan will be the player to look out for as he scored 34 off 21 against Punjab Lions CC.

The bowling attack of Limassol Gladiators conceded heaps of runs in the first two games. It is advisable to pick the top order batsmen of Nicosia Tigers CC.

Nicosia Tigers CC is expected to win this match.