Samuel Gill bats in the top order of the Hammers. He has scored 63 runs in three innings this year. Most importantly, he has scored a half-century. He could score many points if he gets going in the middle. 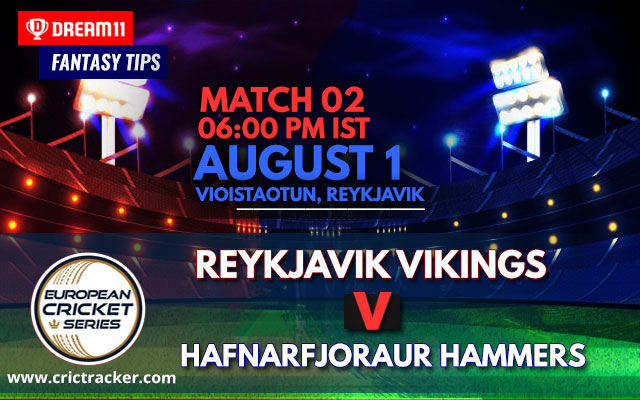 The 2nd match of the ECS Iceland T10 League between Hafnarfjoraur Hammers and Reykjavik Vikings will be played at the Vioistaoatun in Reykjavik.

After a match with Kopavogur Puffins, the home team Reykjavik Vikings will play their second match of the Iceland T10 League against Hafnarfjoraur Hammers. Vikings would look to defeat the Puffins in the first game and then continue their winning momentum in the afternoon match.

The weather predictions hint that the skies will stay cloudy in Iceland on Saturday. The temperature is expected to be 13 degrees Celsius.

The fast bowlers might enjoy bowling at this venue because of the cloudy weather conditions. The batsmen would look to take advantage of the shorter boundaries.

The home team will rest its hopes on all-rounder Lakmal Bandara, who has aggregated 248 runs this year. His strike rate of 275 makes him a ‘must-have’ for this T10 match. Derick Deonarin is a batsman who could chip in with a good 30-40 runs in the middle. He has scored 157 runs in 7 innings for the Vikings, which shows that he is in a good touch.

Mohammad Younas has been the best bowler for the Hammers. With seven wickets in the 11 overs that he has bowled this year, Younas will be the player to look out for. Wicketkeeper-batsman Lee Nelson is the top run-getter for the Hammers in 2020. He has scored 100 runs in four matches and his highest score is 60.

Samuel Gill bats in the top order of the Hammers. He has scored 63 runs in three innings this year. Most importantly, he has scored a half-century. He could score many points if he gets going in the middle.

Reykjavik Vikings are expected to win this match.