Asif Kalyal picked up three wickets in his last match. He can prove to be the ‘X-factor’ player in this match. 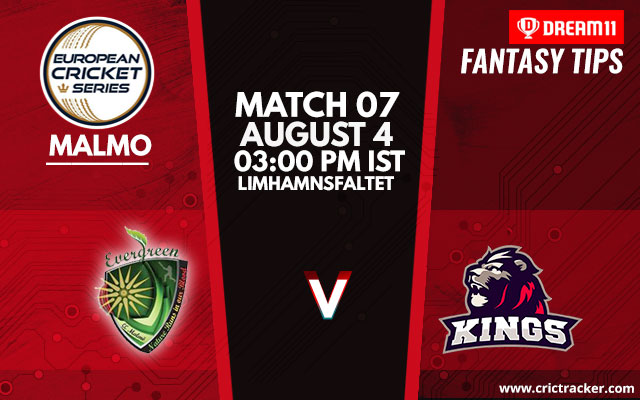 The 7th match of the ECS Malmo Tournament between Malmo Kings Cricket Club and Evergreen Cricket Club will be played at the Limhamnsfältet in Malmo.

After losing their first two games on the opening day of the ECS Malmo Tournament, Evergreen Cricket Club will be keen to open their account on the points table with a win against the Malmo Kings Cricket Club. The Kings had won their first match against Helsingborg Sports Club, but they succumbed to a loss against the Karlskrona Cricket Club in their second match.

The skies will be partly cloudy in the morning. The temperature will stay around 16 degrees Celsius.

The pitch has suited the spin bowlers so far in the competition. None of the teams managed to touch the 100 runs mark on the first day.

Jahandad Mushtaq played a good knock of 32 runs against the Karlskrona CC. He showed that he can play a big innings and he will be the top pick from Malmo’s batting department. The Malmo Kings CC’s bowling attack did not fare well on the opening day, but Zain Muzaffar had bowled a brilliant spell of 0/6 against Helsingborg. He can be backed to be amongst the wickets in this game.

Irfan Mian was the most impressive bowler from Evergreen CC as he picked up two wickets after conceding only few runs against Karlskrona CC. Skipper Umar Nawaz can be a reliable pick from the Evergreen CC batting order. He scored a 22-ball 33 against Malmohus CC. Expect him to continue his fine form.

IPL 2020: Did MS Dhoni take a sly dig at Suresh Raina in the post-match presentation?

Asif Kalyal picked up three wickets in his last match. He can prove to be the ‘X-factor’ player in this match. It is advisable to pick him in the team.

Malmo Kings Cricket Club is expected to win this match.