Faheem Nazir can be a top pick for captaincy choice. He opens the batting and also does well with the ball. 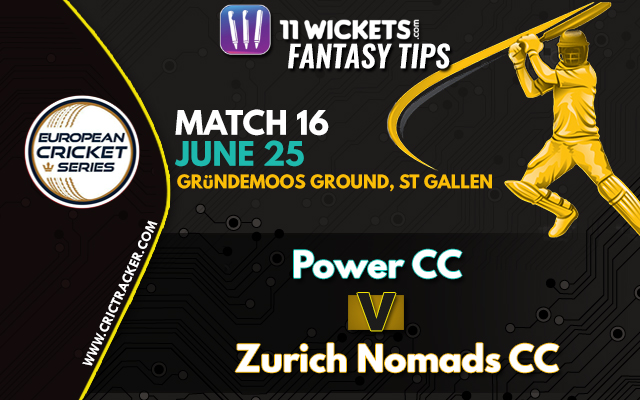 The 16th match in the ECS T10 St Gallen, 2020 will be played between Zurich Nomads CC and Power CC at the Grundenmoos in St Gallen.

This game can be streamed live on Fan Code and European Cricket Network YouTube channel.

Power CC has been dominant so far with two victories out of the three they have played in the tournament. The only defeat came against Olten CC, who are table toppers at the moment. We can expect a score of 80-100 if Power CC bats first as they have good batting line-up.

Zurich Nomads CC also had similar results like Power CC. ZNCC also lost their lone game against Olten CC. Both Power CC and ZNCC will surely fight for a better spot on the points table when they meet against each other.

Weather is expected to be sunny around 25 degrees and the full match can be expected according to AccuWeather.

An average score of 102 in the first innings has been recorded thus far. The team chasing has lost 6 and won 6 out of the 12 matches so far in the tournament.

Baljinder Singh – 3 Wickets in a match and 11 not-out

Faheem Nazir can be a top pick for captaincy choice. He opens the batting and also does well with the ball.

Power CC is expected to win the match