Ashwin Vinod is a good option to make captain of GL team. 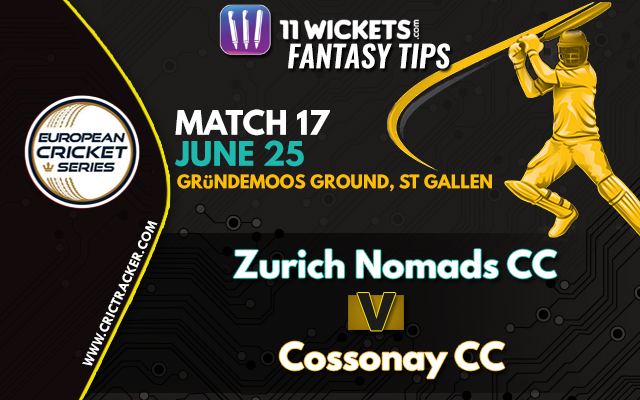 The 14th match in the ECS T10 St Gallen, 2020 will be played between Cossonay CC and St Gallen CC at the Grundenmoos in St Gallen.

Cossonay Cricket Club will face the Zurich Nomads CC in their fourth match of the tournament. Both the teams are locking horns for the first time and they will be looking to dominate each other. ZNCC didn’t play any game on Wednesday and must have rested well. This will be their second consecutive match of the day and would be keen to end the league stages on a high.

The weather is absolutely clear on Thursday. No rain is predicted during the match with the temperature expected to hover around 20 Degrees Celsius.

The pitch on offer is very good to bat and the scores in the last five matches prove it. COCC smashed 120 against Zurich Crickets CC and the trend should continue even on the final day of league stage.

Faheem Nazir and Azaeem Nazir are the two best all-rounders for Zurich Nomads CC. The former has scored 110 runs in three outings so far and has also picked two wickets. Apart from them Shijo Joseph is the must-have bowler as he has seven wickets to his name. For the COCC, Aidan Andrews has been the best with 55 runs and 4 wickets to his name. Ashwin Vinod and Jai Sinh are the other players you should have in your team.

Ashwin Vinod, despite batting down the order, has been brilliant as an all-rounder so far and can easily be made the captain of Fantasy team in GLs.

Cossonay CC is expected to win the match.