Noorkhan Ahmadi is a decent all-rounder having scored 764 and picked 37 wickets.

The 5th match of ECS T10 St Gallen 2020 will be played between Winterthur CC and Zurich Crickets CC at Grudenmoos in St Gallen.

The match starts at 5:00 PM local time (8:30 PM IST) (3:00 PM UTC). This game can be streamed live on Fan Code and the YouTube channel of the European Cricket Network.

After the successful completion of the ECS T10 2020 in Stockholm, the caravan will now move to St Gallen in Switzerland. The Stockholm leg of this league was quite exciting and it was Pakistanska Foreningen which ultimately lifted the trophy. Now, another seven new teams will compete in the St Gallen league to lift the trophy.

As usual, this tournament will be quite fast-paced. Over a course of five days, 25 matches will be played in total. The format will be the same as it was earlier. In the last game on the opening day of the tournament, Winterthur CC will be playing Zurich Crickets CC.

The chances of precipitation are between 5 per cent and 11 per cent during the scheduled time of this match. Rain is not expected to play a significant factor and teams shouldn’t be bothered much.

Not much is known about the track at St Gallen. But going by the external conditions, the humidity levels should help the fast bowlers initially. Dew might set in as the evening progresses.

Nicholas Henderson is a decent batsman having scored 244 runs at an average of 40.67 and has picked 10 wickets as well. Noorkhan Ahmadi is a brilliant all-rounder having scored 764 runs with five half-centuries in 33 innings and has also picked 37 wickets. Gokul Das seems to be a very exciting prospect with the bat and should be a good option for your eleven. Deesh Banneheka and Bilal Salim form the other top picks for this match. 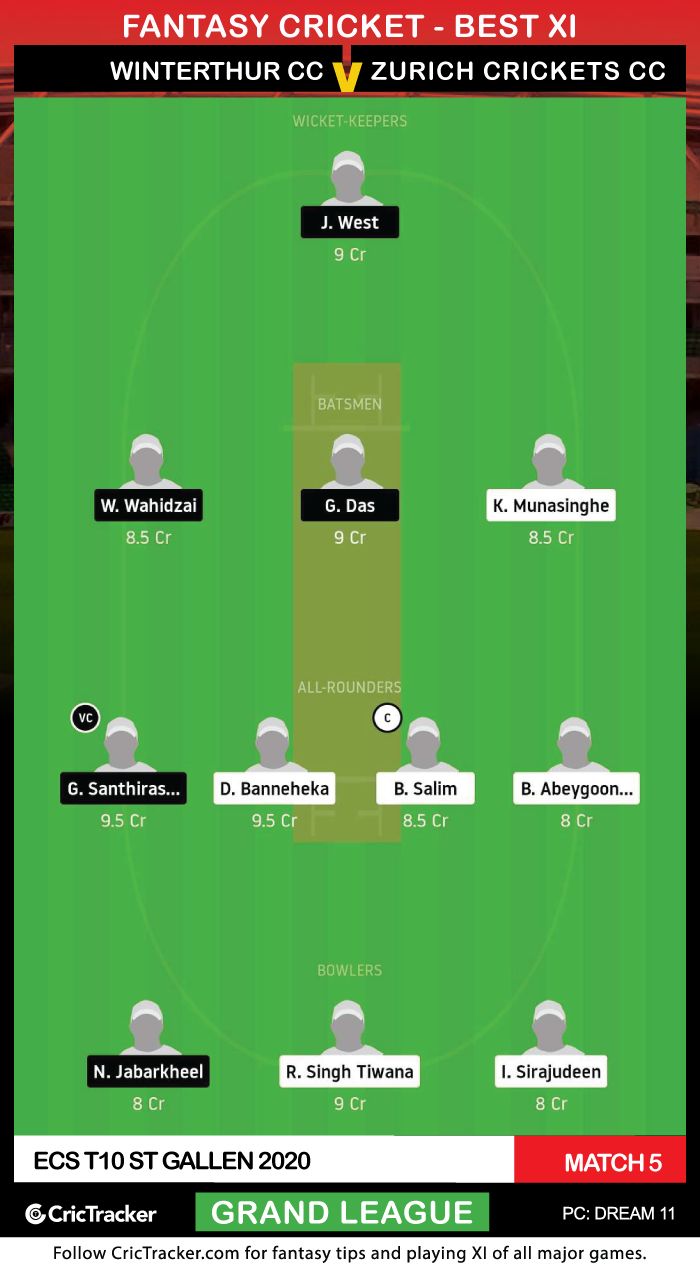 Since this will be the last game of the day, it’d be better to observe the trends from the previous four games before finalizing your teams.

Winterthur CC is expected to win the match.