Nasir Mahmood is the only captaincy option to look forward to in this game. 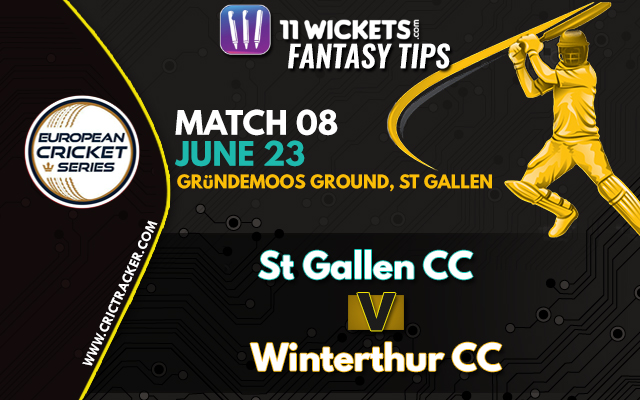 The 8th match in the ECS T10 St Gallen, 2020 will be played between St Gallen CC and Winterthur CC at the Grundenmoos in St Gallen.

Winterthur CC will play their second match of the tournament on Tuesday against the hosts St Gallen CC. They won their only game on Monday against Zurich Crickets CC and will be keen to keep their winning momentum going. St Gallen CC, on the other hand, had a mixed day. They lost to Olten CC in their opening game but then bounced back to defeat Zurich Crickets CC later in the day.

There is no chance of rain as a pleasant day will see the two teams take the field. The temperature will be around 22 Degrees Celsius.

Expect the teams winning the toss to bat first and post a total of around 80-85 which is deemed to be par after the first day’s play. Only one team crossed the 100-run mark and it is clearly a winning score.

Bashir Ahmed Khan is an impressive batsman and his unbeaten 27 proved it as well. Rajveer Singh Tiwana and Sufyan Cheema are the other batsmen are to watch out for from WICC. Deesh Banneheka and Diyon Johnson will look after the bowling attack. For SGCC, Nasir Mahmood is the perfect captaincy option thanks to his all-round ability. Apart from him, Muhammad Waqar and Ali Abbas are the decent options to pick in your team.

Teams are expected to make changes to their line-up. Look out for playing XIs of both the sides after the toss.

Winterthur CC is expected to win the match.