Darshan Lakhani and Chandan Khatri look like the best options for C and VC. 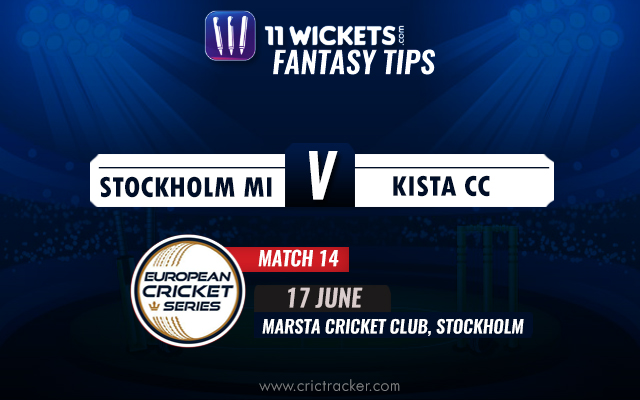 The 14th match of 2020 ECS T10 Stockholm League will be played between Stockholm Mumbai Indians and Kista CC at the Marsta Cricket Club in Stockholm.

The 14th match of the European Cricket Series in Stockholm will see the Stockholm Mumbai Indians lock horns with the Kista Cricket Club. The scheduling has been a bit weird as this is only the second game for KCC while SMI will playing its fifth match. The latter side has lost all its four matches thus far and will be keen to put up a decent effort to win the game.

Kista Cricket Club, on the other hand, has won their only match against Alby Zalmi CC on Tuesday. They will be hoping to keep their winning momentum going.

There are chances of rain again on Wednesday and it will remain cloudy for the whole day. The temperature will hover in the late 10s during the match.

Four sides batting first crossed the 90-run mark on Monday and chasing has proved to be tough. But KCC itself chased down 84 in their first match and only two teams have chased successfully so far in seven unaffected matches. The team winning the toss is expected to bat first.

Darshan Lakhani, with five wickets and 26 runs, has been the best player for the Stockholm MI. Avinash Donagre is another player who has done well with the ball. For the KCC, Chandan Khatri is a decent all-rounder while Fashahid Shah is also decent batsman and bats at three.

Stockholm MI might make a few changes to its line-up as they would want to win this match. Watch out for playing XIs after the toss before finalising your Fantasy team.

Kista CC is expected to win this match.