Samiullah Rahmani should be your preferred captaincy option. 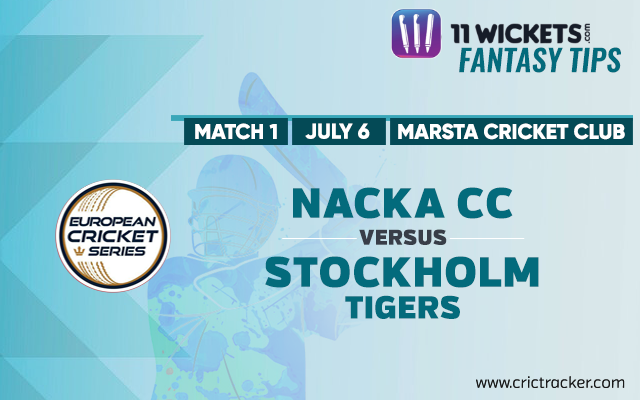 The 1st match of the ECS T10 Stockholm, Botkyrka between Nacka CC and Stockholm Tigers will be played at the Marsta Cricket Club in Stockholm.

The European Cricket Series in Stockholm, Botkyrka will get underway on Monday with as many as 10 teams fight it out for the trophy. These sides are divided into two groups of five each. A total of 24 matches will be played in this tournament to decide the winner. Nacka CC and Stockholm Tigers will lock horns in the opening game of the competition and will be hoping to win the first match.

There is high chance that this match will be interrupted by rain. There are possibilities of thunderstorms during the game as well.

The ECS Stockholm T10 was also played at the same venue and the last four matches of the tournament had witnessed some high scores. It shouldn’t be a bad idea to bat first after winning the toss.

Arif Hossain was the highest run-getter of his team in the last T20 tournament scoring 128 runs and also picked five wickets in four matches. Rashedul Islam (82 runs in 4 matches) and Kawser Ahmed (5 wickets) are also decent picks from STT for this match. As far as Nacka CC is concerned, they have Samiullah Rahmani as their best player. He has played 30 matches for them and scored 632 runs apart from picking 40 wickets. Zabi Zahid and Sohail Zahid are the other top players in the team.

Most of the players in our probable XI will play. However, this is the first match of the teams. So it would be wise to wait for the playing XIs.

Nacka CC is expected to win this match.