Shafali Verma hit 5 consecutive fours in an over of Katherine Brunt in the 2nd T20I. 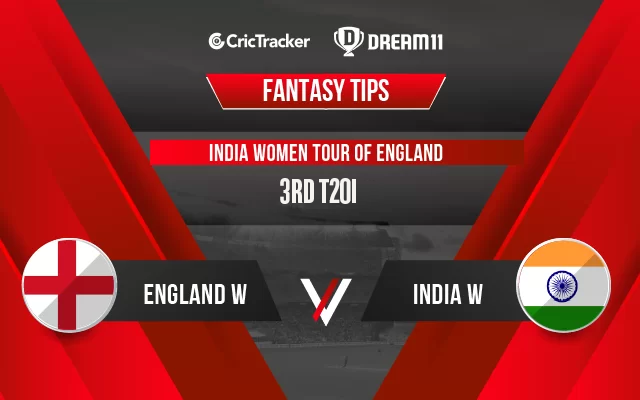 Shafali Verma, Harmanpreet Kaur, and Deepti Sharma shone as India Women had the last laugh against England Women in the 2nd T20I. The visitors won the game by 8 runs to take the series to the decider, which is scheduled to be played on Wednesday.

Tammy Beaumont and English skipper Heather Knight had almost taken the game away from India Women, but both got out in the span of 2 balls, and thereafter, nobody could keep the asking rate ticking. This eventually made them lose the game by 8 runs. Both the teams played some excellent cricket in this series and we can expect the same quality of cricket in the final game as well.

The surface here at County Ground, Chelmsford will assist both batters and bowlers. The slow bowlers have found success in the recent T20 matches and they can expect turn as well. It’s a 140-150 kind of a wicket and it’s better to bat first in the series decider.

Tammy Beaumont kept the scoreboard ticking in the 2nd T20I after England Women lost 2 early wickets. She made a valuable contribution of 59 runs from 50 balls.

Heather Knight was really unfortunate to get run-out in the 2nd T20I. She played a sensible knock of 30 runs. In 2 matches in this series, she has scored 36 runs at a strike rate of 94.73.

Shafali Verma got perfect revenge against Katherine Brunt in the 2nd T20I by hitting 5 consecutive fours in an over. She missed her half-century by just 2 runs.

Harmanpreet Kaur promoted herself up the order and showed aggressive intent from the start. She batted well for her 31 runs from 25 balls, which comprised of 2 fours and 2 sixes.

Danielle Wyatt batted well in the 1st T20I for her 31 runs but failed to repeat the same in the 2nd T20I. She is a risky captaincy pick for your fantasy teams.

Richa Ghosh can play the role of finisher for India Women. You can take a risk and pick her as your fantasy team skipper.

Sneh Rana has the most economical bowler for India Women in this series, but she hasn’t been amongst wickets. Considering the numerous options in the all-rounders’ slot, it’s better to avoid her while making your fantasy teams.