It’s salt on wounds for Team India as they have been docked two World Test Championship points for maintaining a slow over-rate in the recently-concluded Edgbaston Test against England. The visitors suffered a humiliating seven-wicket defeat as the Three Lions successfully chased down 378 to draw the series level 2-2. This was the first occasion of a team successfully chasing a 350-plus target against India in Tests.

As if this defeat wasn’t agonizing enough, the Indian team has been hit with another blow. The Jasprit Bumrah-led side was found guilty of maintaining a slow over-rate and the point penalty dropped India down to the fourth position in the WTC points table. India’s loss was Pakistan’s gain as the Babar Azam-led side has now advanced to the third place.

As per the latest standings, India are on 75 points (point percentage of 52.08), just a shade below Pakistan’s 52.38%. Coming to the rules, players are fined 20 percent of their match fee for every over their side fails to bowl in the allotted time. In addition, a team loses one point for each over short. As the visitors fell short by two overs after time allowances were taken into consideration, they were docked two WTC points and 40 percent of match fees.

While on-field umpires Aleem Dar and Richard Kettleborough, third umpire Marais Erasmus and fourth umpire Alex Wharf levelled the charge, match referee David Boon imposed the sanctions. This news is certainly a big blow for the Indian team and it can largely hamper their chances of making to the WTC final for the second successive time.

Meanwhile, the fifth and final rescheduled Test panned out like a rollercoaster and India looked on command for a major part. However, chasing 378 for win, the Three Lions put up a jaw-dropping effort and crossed the line comfortably. Jonny Bairstow was the chief architect of England’s triumph as the dasher scored centuries in both innings. 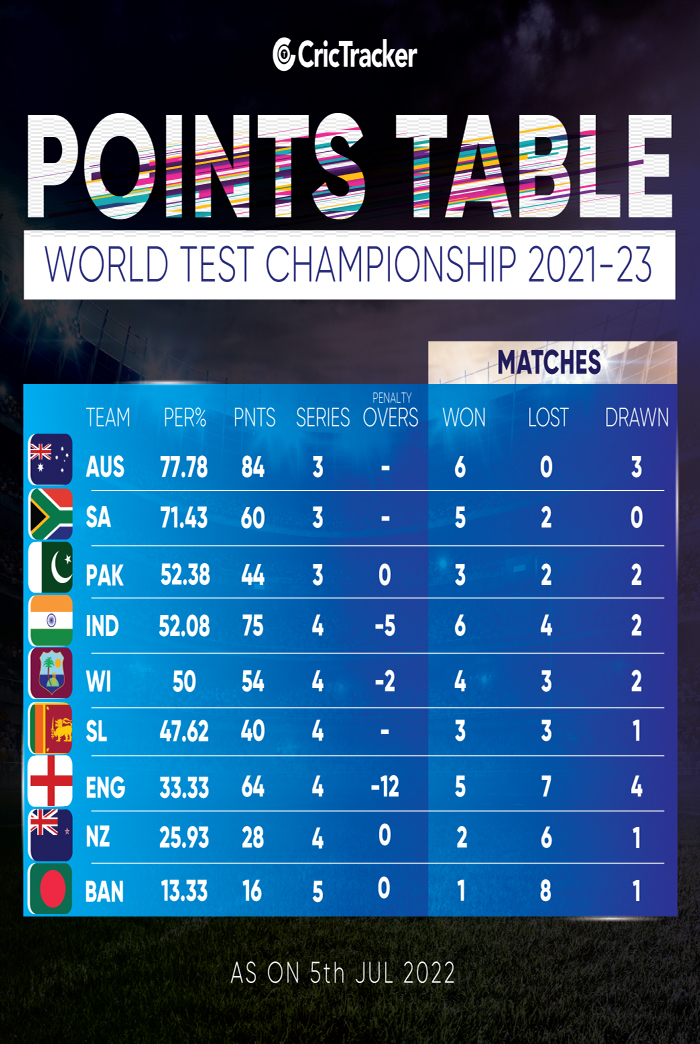