England vs Australia 2020, 1st T20I: Cricket Match Prediction: Who will win the game?

England vs Australia 2020, 1st T20I: Cricket Match Prediction: Who will win the game?

This series is going to be enthralling by every sense of the word.

Well, it’s time to buckle up tightly for the rivalry that is as old as the age of cricket. The English summer has been wilder than the wildest stretch of the imagination. But for the good, the stocks of the English board that was once eyeing a financial meltdown have soared up. And even if they would not have had, this could well have been the series for it. For all the right reasons (unlike India versus Pakistan), the face-off of England and Australia is the definition of best.

In a world devoid of the pandemic, there would have hardly been anything of more context than this three-match series, with the T20 World Cup round the corner. However, with the World Cup gone to the dogs, the series can still not be said to have lost everything about it, as this could be a mode to get into the rhythm for what is soon scheduled to kick off in the United Arab Emirates!

Though this rivalry is between the No. 1 and No. 2 teams in the ICC rankings, England will have a slight edge as they are much oiled after a couple of months of cricket under their belt as compared to rivals Australia- who last played an international game a good 5 months ago in an ODI against New Zealand in a series abandoned midway due to the pandemic.

It is strange the English skipper Eoin Morgan feels that the visitors will be “slight favorites” despite the aforementioned. Not to mention that England’s record in the last 6 T20I series they have played reads five wins and a draw that came in the recently concluded series against Pakistan. However, the Australians could challenge England’s feat by their record of losing only once in the 10 T20I matches they have played in the last two years. That the Aussies come into this series as the No.1 ranked side only adds more fuel to the fire.

If memories stretch that far, the last time these two teams met in a 20-over clash was in the summer of 2018 when England scripted an easy win in the one-off match at Edgbaston. Before that game, the Englishmen had thrashed them 5-0 in the ODI series: the one that saw England batter the record 481 for 6 in an ODI game. Well, all of that is now a thing of the past and the coming clashes are going to be enthralling by every sense of the word.

The visitors seemed to have enjoyed the surfaces provided for the intra-squad warmup matches before the series. The pitch is expected to be poised for both batsmen and bowlers, though the expectation of rain means overcast conditions, and that means the pacers will be licking their lips. (Though that saliva can still not be used on the ball).

England will miss the presence of two of their first-choice limited-overs players- Jason Roy and Ben Stokes. However, Jofra Archer and Mark Wood return to their squad after missing the last series against Pakistan. The former will occupy the spot of Saqib Mahmood, who is included as a reserve in the team, whereas the latter might be preferred over Tom Curran.

Sam Billings will probably get a look-in whereas Jos Buttler, who will be seen opening alongside Jonny Bairstow, is a sure entrant. Buttler’s entry in the XI has made things interesting in the top-three where Tom Banton has performed well against Pakistan and Dawid Malan has shone too.

However, the tough choice of picking one will have to be made by the management. Tom Curran, Chris Jordan, Adil Rashid, and Moeen Ali will keep their places.

For Australia, the availability of Marcus Stoinis and particularly Glenn Maxwell, who decided to take a break for his mental health last year, is good news. With the glitz of Aaron Finch and David Warner leading at the top and Steve Smith’s reliability in the middle, their batting unit looks as daunting as any currently.

Their squad has the formidable pair of quicks in Mitchell Starc and Pat Cummins, assisted by Kane Richardson and the spin duo of Adam Zampa and Ashton Agar. It will be interesting to see who makes the cut between Ashton Agar and Daniel Sams, however that will bog down to the need of the team between spin or pace.

The prediction is for England to win the match 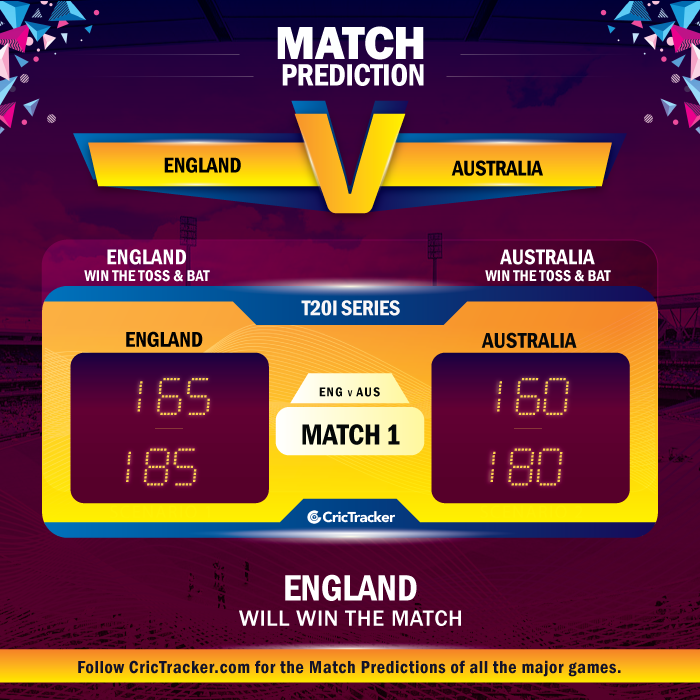