Shoaib Malik and Hafeez are not available while Moeen Ali has been ruled out with a rib injury.

With only three weeks to go for the World Cup, England and Pakistan will lock horns in the first of the five-match ODI series on Wednesday. This is an extremely crucial series for few players of both the teams as their place in the World Cup squad is at stake. For England, it is Jofra Archer while the Men in Green will hope for Mohammad Amir to do well and claim a spot in the mega event.

England defeated Ireland in the one-off ODI while also sealed the last over thriller in the only T20I against Pakistan. They would love to continue the winning momentum. The return of the likes of Ben Stokes, Jonny Bairstow and Jos Buttler also boosts the Brits and they will walk back into the XI. Pakistan would love to test Mohammad Amir ahead of the World Cup.

The first ODI of the five-match series between England and Pakistan will be hosted by the Kennington Oval in London.

There is a bad news for both the teams. It is expected to rain from the morning in London and things might get worse by the time the match starts. Though the possibility of rain comes down by 4 PM, thunderstorms are expected in London. However, later in the evening, things are expected to improve with only 34% of rain predicted by Accuweather. Surely, it will be a shortened game.

There will be swing on offer at the Kennington Oval on Wednesday with the clouds hovering all day. There will be a lot of moisture in the wicket as well. With the rain expected to have its say, the team winning the toss will definitely field first.

Moeen Ali sustained a rib injury and has been ruled out of the first ODI.

Mohammad Hafeez is unavailable for the first two ODIs due to injury.

Shoaib Malik is still not available due to personal reasons and is expected to join the team on May 9.

Babar Azam vs England in ODIs: 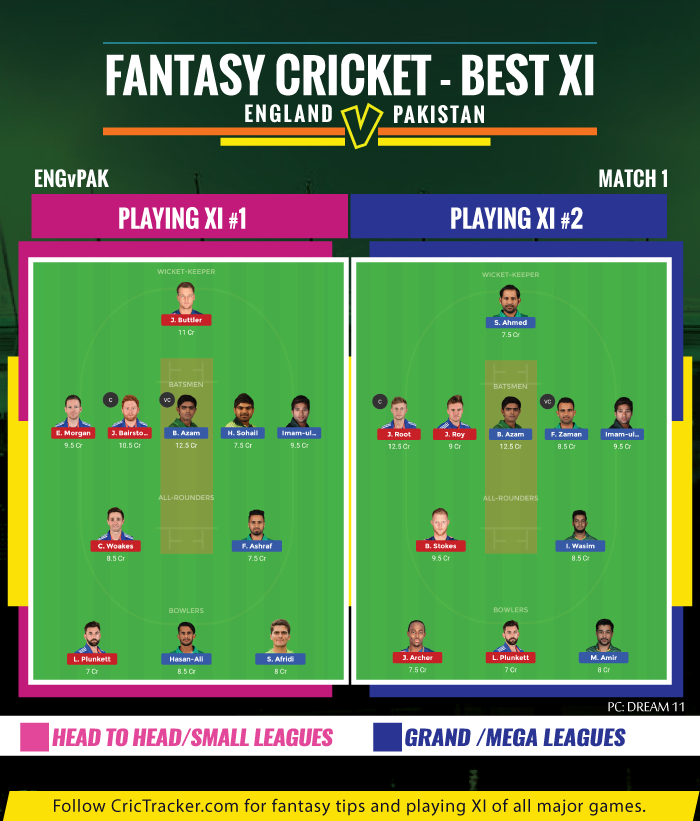 The credits for the players have changed and you have to be very careful while preparing the team.

You can’t take Buttler, Root and Azam in one team. It will be better if only two of them are picked.

England, being the hosts and the number 1 ODI team, is expected to win and take the early lead in the series.