The weather for tomorrow's game isn't promising either.

After England won the one-off T20I against Pakistan in Cardiff, the Three Lions started decently in the five-match ODI series as well. After winning the toss and electing to field first, the hosts, led by Eoin Morgan, didn’t allow their opponents to run away with the match. Under overcast conditions at the Kennington Oval in London, the English bowlers, especially Jofra Archer looked at his lethal best.

Not only did he pick up opener Fakhar Zaman, but also churned out a couple of maidens. However, rain interrupted and the game had to be called off. The second game is scheduled to be played tomorrow at the Rose Bowl in Southampton and Pakistan have to get their strategies in place in order to rattle the Brits. Only left-handed batsman Imam-ul-Haq looked at ease in the erstwhile encounter.

The second ODI of the five-match series between England and Pakistan will be hosted by The Rose Bowl in Southampton.

The weather forecast isn’t expected to be match-friendly in tomorrow’s game. There is a forecast of rain from morning 9 AM itself. The temperature will hover around the 13 degrees Celsius mark. The humidity will be around 50 per cent mark.

The pitch has been an absolute belter in the domestic circuit with an average score well above the 300-run mark. And the team batting first has had the advantage. However, with the forecast of a downpour, it will be safer to field first after winning the toss.

Ben Stokes in ODIs in Southampton 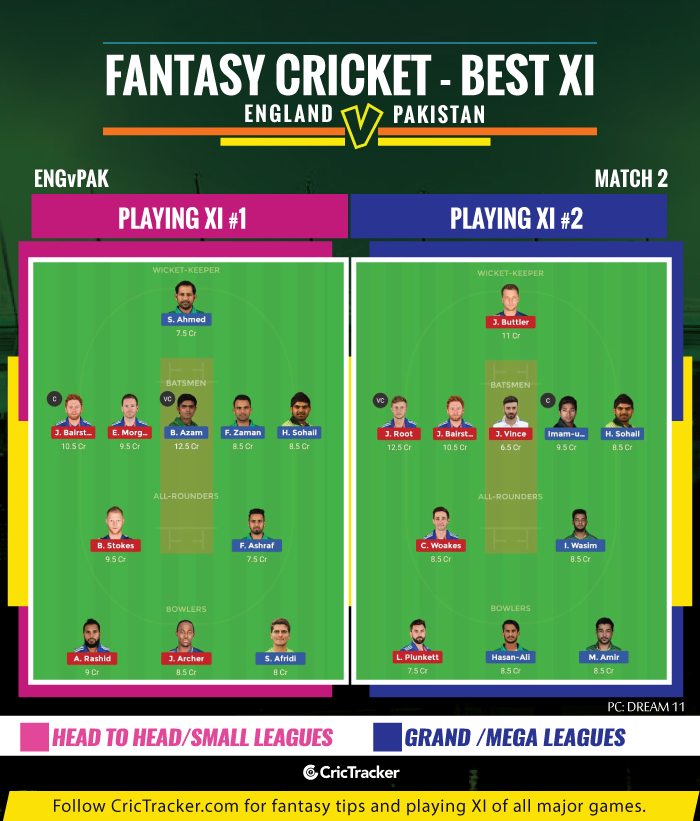 At a high scoring venue, pick your full quota of five batsmen.

Among the bowlers, one can go for the likes of Jofra Archer, Hasan Ali, Mohammad Amir, all of whom are equipped to bowl with the new ball as well as at the death.

England are the most likely winners of the match.