England vs Pakistan, 2nd T20I: Cricket Match Prediction - Who will win the match?

England vs Pakistan, 2nd T20I: Cricket Match Prediction – Who will win the match?

The time is right for two teams to introspect and polish themselves through whatever limited chances they have with the T20 World Cup scheduled next year.

The romance, the inseparable bond of England and rain continued in Manchester as the third consecutive match was marred by unfavorable weather. For England, there was another unfavorable mess going around as Pakistan, for whatever time the game was played minus Tom Banton’s belligerence, looked the stronger side.

The opening game for the tourists could have panned better had it not been for Iftikar Ahmed’s stumble in the slips when Banton was struggling to find his feet at a score of 5, who eventually chastised the opponents with 71 off 42. To talk about positives for Pakistan, there were many. Of course, the bowlers had to take a 21-year-old’s wrath but the spinners did well to proceed a collapse as England lost 4 wickets for 14 runs in a space of roughly 3 overs.

England has a reputation of playing spin better, however, none of their premium and fine tacklers of spin- Jos Buttler, Joe Root, and Ben Stokes– are in the squad for this series. Imad Wasim and Shadab Khan are two excellent spinners, nonetheless, England would and should be disappointed in not putting enough price on their wickets. The batsmen, with an exception of Banton, were not able to cut loose against the fast bowlers either as Pakistan’s two left-arm quicks were pleasingly economical.

The current series has lost a lot of relevance to the pandemic, in the absence of which this would have been a preparation of the T20 World Cup. However, with that going to next year, the time is right for two teams to introspect and polish themselves through whatever limited chances they have. Given England’s proactivity, they will certainly look to do that in the second game in Manchester on Sunday.

Even though all of England’s wickets fell to spinners, Tom Banton’s bat showed that good cricket will be rewarded. And hence both the teams reaped the benefits when they were strategically smarter than their opponent. Dampness and moisture are obvious given the way the weather has been in the last few days.

The outfield in the last game appeared just fine regardless of the expectations of it being heavy. The same can be expected today. The forecast is promising than the last time and hopefully, we should have a full game. Although it is foolish to make predictions when it comes to the England weather.

The tourists made a big statement by choosing experience over youth as they went with Mohammad Hafeez and Shoaib Malik, while Haider Ali missed out. However, with the game washed out, that ploy was not put to test and therefore the same combination can be expected in this game.

Spotlights will be on the top-order as Babar Azam will be seen opening with Fakhar Zaman. With Iftikhar Ahmed, Imad Wasim, and Mohammad Rizwan alongside veterans Hafeez and Malik, the Pakistan order looks certainly better than their adversaries.

Quite surprisingly, Wahab Riaz sat out for the opening game as Haris Rauf was accommodated in the eleven. Although conceding 32 from his 3 overs, Rauf failed to justify Riaz’s exclusion and therefore Pakistan might want to give the left-arm pacer a go in this game. Mohammad Amir and Shaheen Afridi looked subtle in their spells apart from an odd occasion or two. Shadab Khan and Imad Wasim, both of whom picked a couple each will look forward to repeating the same.

Jonny Bairstow must be disappointed in the way he threw his wicket and must be wanting to make up for the loss in this game. Dawid Malan continued with his slow start as he tried to anchor the innings around Tom Banton. Eoin Morgan played a couple of breathtaking shots before failing to bank on his start.

Interestingly, England chose Lewis Gregory over David Willey, who had an excellent run against Ireland earlier this month. Though Imad Wasim eventually got the better off him. Moeen Ali did not get a hand on the ball while he did not contribute anything notable with the bat.

Sam Billings and Chris Jordan were in the middle when rain stopped play and they will be playing their respective roles in this game. Given Adil Rashid’s ability to vary the flight and deliver well with his leg-spin, he is default at the Old Trafford.

The prediction is for Pakistan to win the match 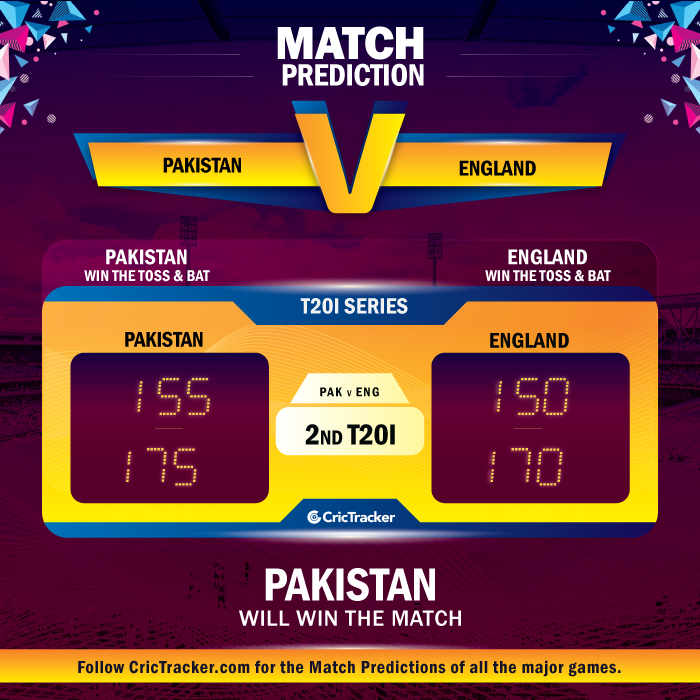