England vs Pakistan, 3rd T20I: Cricket Match Prediction- Who will win the match?

England vs Pakistan, 3rd T20I: Cricket Match Prediction- Who will win the match?

For England- who have not lost a home T20 series for over two years, this game is going to be a chance to test a few warming the bench while carrying the momentum before Australia visits them.

England Cricket Board will add another feather in their cap with Pakistan’s tour coming to an end. Such are the times that we live in that the completion of a series has become a matter of pride. But ECB deserves applause for what they have put up for the world to consume after being bereft of any sporting action of any kind for long.

The well-deserved accolades, however, should not go just in favor of the cricketing board after the kind of performance those who the board governs gave in the last game. By the grace of English weather, we saw the first completed T20 International of the summer after a hat-trick of washouts. And the Brits made sure to exploit the undisciplined efforts of the men in green with the ball that thoroughly assisted them to achieve their highest chase against Pakistan in T20Is.

However, the English bowlers did no good in allowing Pakistan to rack up a record target for them to chase. There were things to cheer at the start as Babar Azam shone for his half-century and showed his class alongside Fakhar Zaman whereas Mohammad Hafeez capitalized with his 36-ball 69. The tourists must have- and only obviously- fancied their chances after putting 195 on the board, however, skipper Eoin Morgan and Dawid Malan had other plans. They were cannier with the bat as they made the alleged spin-friendliness of Manchester a mockery.

Pakistan opened the doors for a moment courtesy Shadab Khan’s successive strikes to dismissed flowing openers Tom Banton and Jonny Bairstow, however, a single moment of brilliance proved insufficient to turn things their way. A defeat today will mean going empty hand and after all the buildup around the series, that will be excruciatingly underwhelming for Pakistan. After being lambasted by Shoaib Akhtar, Babar Azam will also be keen to not repeat blunders like not bowling Mohammad Hafeez with two left-handers batting.

For England- who have not lost a home T20 series for over two years, this game is going to be a chance to test a few warming the bench while carrying the momentum before Australia visits them.

The way the track behaved was slightly un-Manchester like in a sense or two, however, the sun baking the pitch and vaporizing the majority of the moisture could be credited for that. The weather is expected to be on similar lines and an unhindered 40 overs of cricket are expected. Although with a cloud cover, the fast bowlers will get assistance too, apart from the usual help for spinners.

Pakistan is almost certain to miss the services of Mohammad Amir, who reported a strain in his hamstring and went off midway in the previous game. The veteran pacer Wahab Riaz, who has stayed away from the action in both the games, will be the perfect replacement for him.

Despite being on the verge of 40, Mohammad Hafeez looked as fluent as the 21-year-old Tom Banton did in the first match. However, another expert Shoaib Malik does not have a similar story to narrate and he could pave way for the youngster Haider Ali. Shadab Khan made another impression when both Imad Wasim and Iftikhar Ahmed struggled to hold ground.

Babar Azam and Fakhar Zaman’s partnership set the tone for Pakistan and it will be crucial in this game if they want to level the series. For that, Shaheen Afridi- who looked bemused during his expensive, wicket-less spell, will need to take responsibility as well.

Tom Banton broadcasted himself well in the first game when England appeared a stumbling block the most time. With Eoin Morgan’s whirlwind and Jonny Bairstow’s punching knock, any tinkering at the top is improbable.

Where England might want to shuffle things is in the slot of Chris Jordan, who can vacate space for David Willey. Dawid Malan hit the winning runs in the previous game and his 54 was a good way of seizing an opportunity.

Moeen Ali might continue the search of his form, while Lewis Gregory, who has not yet got a chance to play his role, will be given another look-in. Saqib Mahmood failed to trouble the visitors and being aware that this is his last appearance for some time, he should look to make the most of it and so should Tom Curran.

Live Streaming– The match can be streamed online on Sony Liv app, and Airtel stream

The prediction is for England to win the match 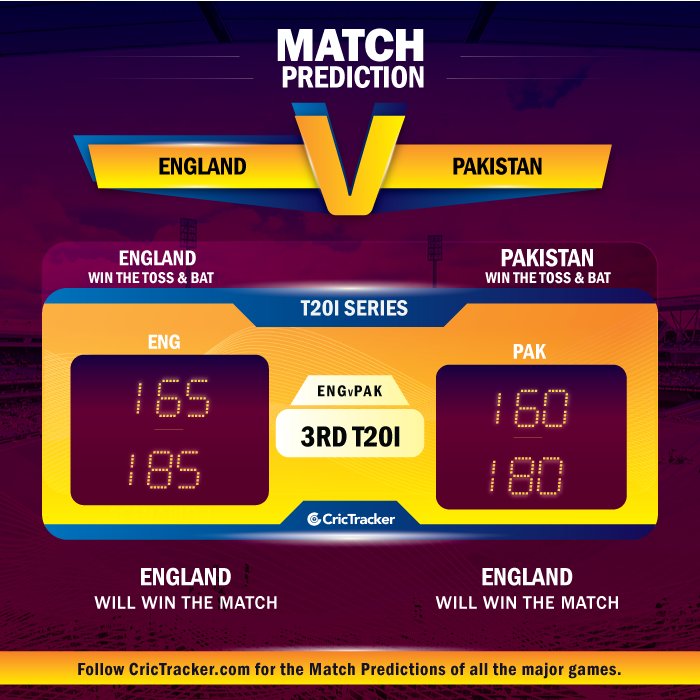