Sarfaraz Ahmed and Ramiz Raza also intervene in the conversation.

The Indian cricket team took on the South African side on Saturday in the 3rd test at Ranchi. The game began with the visitors losing yet another toss and being asked to bowl first. Mayank Agarwal and Rohit Sharma were sent to start the proceedings while Kagiso Rabada was handed over the ball.

The home side didn’t get the kind of start they would’ve expected as Agarwal (10) became a victim of Rabada’s fiery spell in the 5th over. His wicket was soon followed by Cheteshwar Pujara’s dismissal, who fell for Rabada’s change of variations and high pace.

Going further, the Indian skipper Virat Kohli tried to build a small partnership but became the maiden scalp of 1-test-old Anrich Nortje, whose nip-backer hit Kohli’s pad, resulting in his dismissal. In the meantime, the opener Rohit Sharma kept his calm and held the strike from one end.

He soon got the support of Ajinkya Rahane, whose positive batting helped Rohit in the long run and the duo went on to eventually build a blistering partnership. In the process, Sharma also completed his century. At the end of the day’s play, India is at the score of 224/3 with both the batsmen standing tall.

Meanwhile, at the other side of the border, the Pakistan Cricket Board has sacked their skipper Sarfaraz Ahmed from all 3 formats. The decision was taken yesterday and is probably a consequence of Pakistan’s defeat against Sri Lanka in the recently-concluded T20I series. Azhar Ali and Babur Azam are likely to replace him from the post.

However, this bold resolution of the PCB has received mixed reactions. Pundits such as Shoaib Akhtar have praised the officials for this step, while the likes of Rashid Latif and a majority of Sarfaraz fans, have been against the move. Sarfaraz Ahmed’s supporters were also trending a hashtag i.e. ‘#westandwithSarfaraz’ on Twitter. There were also reports of them opposing this decision in Karachi on Saturday evening.

Amidst the chaos, the Indian opener updated a Facebook status after his scintillating century. There were long threads in the comment section with different players expressing their sorrow.

Here is how they reacted: 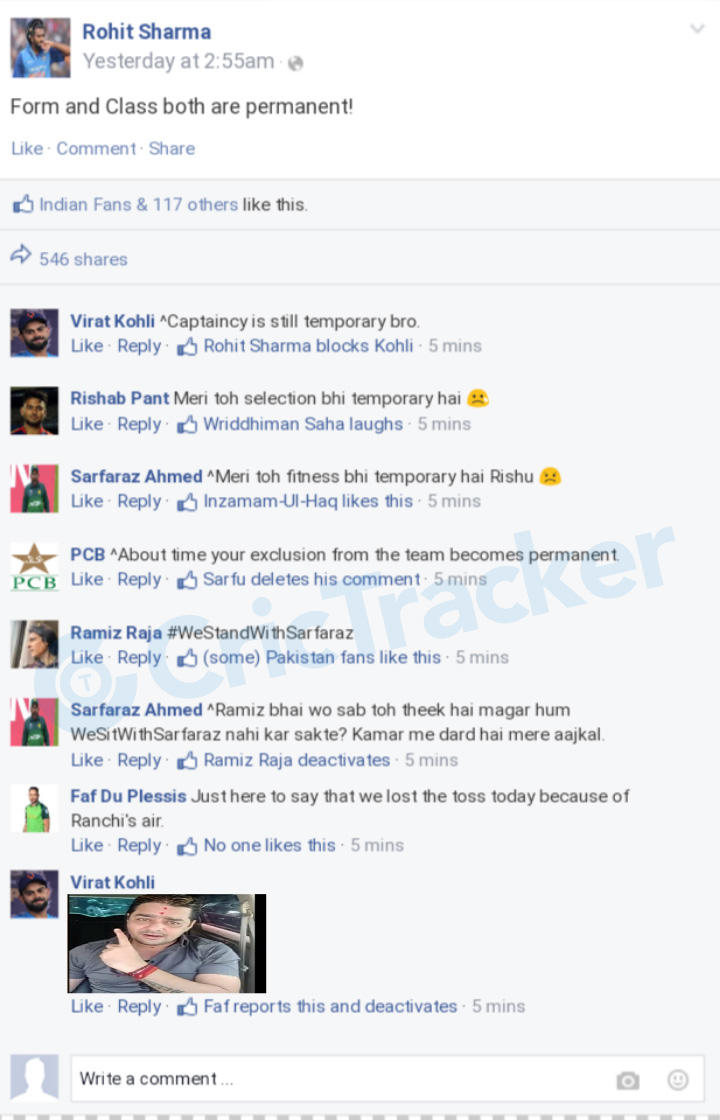