Fake FB Wall: Virat Kohli wishes himself on his birthday; Rohit Sharma trolls him for his batting average in knockout matches

Fake FB Wall: Virat Kohli wishes himself on his birthday; Rohit Sharma trolls him for his batting average in knockout matches

Anil Kumble dedicates a shayari to the Indian captain.

The Indian skipper Virat Kohli turned 31 on Tuesday. The ace-batsman was born on 5th November 1988 and first began playing cricket at the age of nine. At the age of 19, he led the Indian U19 side to the World Cup triumph which was held in Malaysia.

Post the victorious U19 World Cup campaign, Kohli got an IPL contract with the Royal Challengers Bangalore. He then made his international debut against Sri Lanka in August 2008. After a few good performances, he was selected in the 2011 World Cup squad and went on to play for India. The 31-year-old’s 35-run-knock in the final game of the tourney turned out to be really handy for the side.

Going further, Virat played a wonderful knock of 133 runs at Hobart in 2012, which helped India to chase down the target of 300+ runs inside 40 overs. This was the Eureka Moment of his career and there has been no looking back for the lad since then. Currently, the Delhi cricketer is a true contender for the greatest batsman in cricketing history and is one of the hottest properties in Indian cricket.

He has scored more than 11,000 ODI runs at a blistering average of 60. In red-ball cricket, the Indian skipper has scored around 7066 runs in 139 innings he has played.

Wishes pour in for the Indian skipper

Meanwhile, on his birthday, the entire cricketing fraternity showered heaps of wishes on Virat Kohli. In fact, he himself posted a letter on his Twitter handle, which was dedicated to the 15-year-old version of him.

On his Facebook account, Kohli posted a message, wherein, he was seen wishing himself on his 31st birthday. The replies to this were quite interesting, as the Indian vice-captain captain Rohit Sharma trolled his teammate for his performance in the knockout games.

India’s ex-coach Anil Kumble dedicated a ‘shayari’ to Kohli on this auspicious day and in the meantime, Vinod Kambli tried to expose his childhood friend Sachin Tendulkar. The IPL franchise CSK also wittily asked if Kohli has crossed 30 and the Indian captain hilariously trolled head coach Ravi Shastri in response.

Here is the wall: 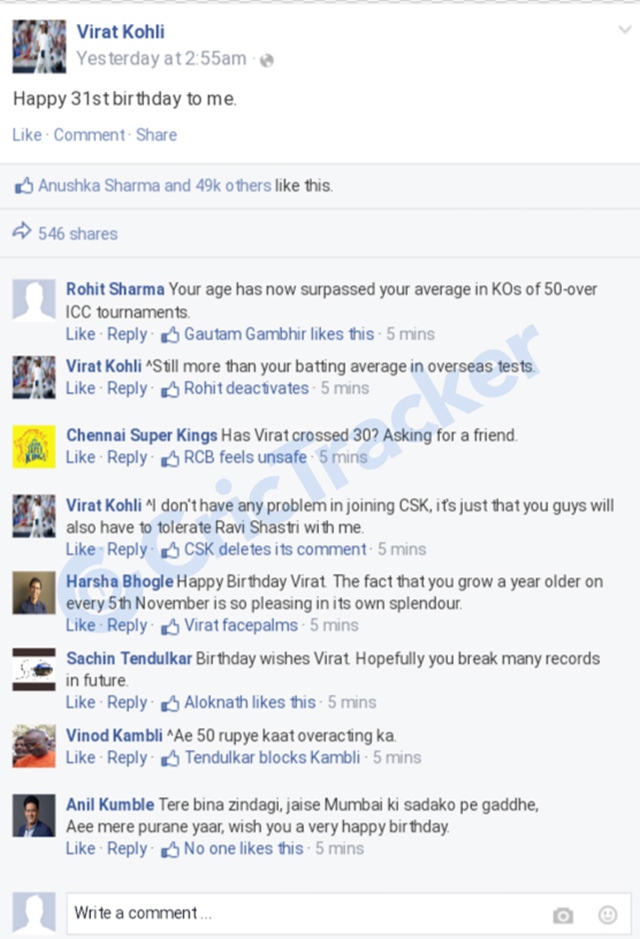