Mahesh Tambe is expected to be the difference in this match. 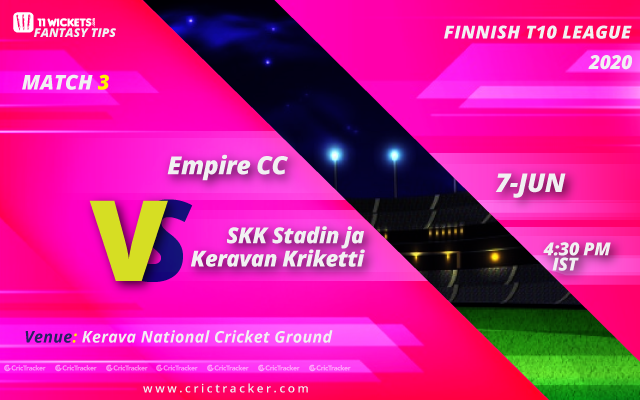 The 3rd match of Finnish T10 League 2020 will be played between SKK Stadin ja Keravan Kriketti and Empire CC at the Kerava National Cricket Ground in Kerava.

Empire CC will open their campaign against SKK Stadin ja Keravan Kriketti in Finnish T10 League. The former will look to avenge the loss of their previous defeat against the same opponent in a 10-over affair. They have Vanraaj Padhaal, Zeerak Ijaz, Jonathan Scamans in their line-up, who will have the responsibility to score good runs. And, ECC will heavily bank on their batting line-up in the tournament opener.

SKK Stadin ja Keravan Kriketti would be quite eager to get off the mark in the T10 tournament with a victory. They have some prolific and talented bowlers as well as batsmen in their ranks. With the likes of Atif Rasheed, Qaiser Siddique and Kake Goodwin, they have a strong batting order that would like to smack the bowlers all across the park from the beginning.

There are chances of rain during the match time. But, it will not affect the length of the match. The wind will be blowing at a rate of 17 to 22 km/hr. Meanwhile, the temperature will hover between 11 and 18 Degree Celsius throughout the day according to Accuweather.

The surface at Kerava National Cricket Ground is expected to go in favour of bowlers as far as stats are concerned. On the other hand, the batsmen will have to work quite hard in order to score runs. They will have to get settled on the wicket before taking the charge against the bowlers. Also, the side winning the toss will look field first to be on the safer side.

Mahesh Tambe is an important all-rounder, who might come out with his brilliance against SKK. So, the users should not miss him while picking their fantasy team. Atif Rasheed and Qaiser Siddique are also big match winners. The former is known for his submissive hitting whereas the latter is all about his sharp bowling skills. In the previous year, Siddique ended as the leading wicket-taker for his team in one of the T10 tournament with 12 wickets.

The conditions will be bowling friendly and the users should go with more bowlers in their fantasy team.

Empire and SKK might opt for some surprising changes in their team in the upcoming contest. So, it will be wise for the user to wait for the confirmed teams.