In the league stage, the Stallions beat the Gladiators both times.

Galle Gladiators lost five matches to start their campaign in the inaugural Lanka Premier League. But after loads of travails, the team, captained by Bhanuka Rajapaksha, qualified for the final of the tournament. In the first semi-final, they edged past the Colombo Kings by two wickets in a thrilling contest.

In the final on Wednesday, December 16, the Gladiators will be up against Jaffna Stallions. Prior to the semis, the Stallions were unable to get a victory under their belt for four games. But in the knockout game, they defeated the Dambulla Viiking by 37 runs.

Their bowlers put forth their A-game and restricted the opponent to 128 in 19.1 overs. Going into the final, the Stallions can be said to have the upper hand, having beaten the Gladiators in both the matches in the first round of the event.

The pitch in Hambantota has been an absolute belter for batting. In the league stage, scores over the 200 run mark were crossed quite a few times. But there have been a few instances when bowlers ruled the roost.

In the crunch game, teams should opt to bat first after winning the toss. The conditions will be cloudy, but with no chances of rain. The temperature will be around the 27 degrees Celsius mark.

Playing Combinations for GAL vs JAF

Danushka Gunathilaka has been the standout batter, not only for the Gladiators but in the entire tournament. In nine matches, he managed 475 runs at an average and strike-rate of 67.85 and 145.25 respectively.

The fact that he scored four half-centuries shows how much he has worked hard. He has faced 327 balls, 227 more than Shehan Jayasuriya, who’s second with 100 deliveries.

Wanindu Hasaranga has been a brute force with the ball in hand. He has been captain Thisara Perera’s go-to bowler with 16 scalps to his name. He has an economy rate of 5.27, which is the best among all the Stallions’ bowlers.

Wanindu can’t afford to drop his guard by any means. With the bat in hand, the right-hander has scored 126 runs, most importantly at a strike-rate of 165.78. 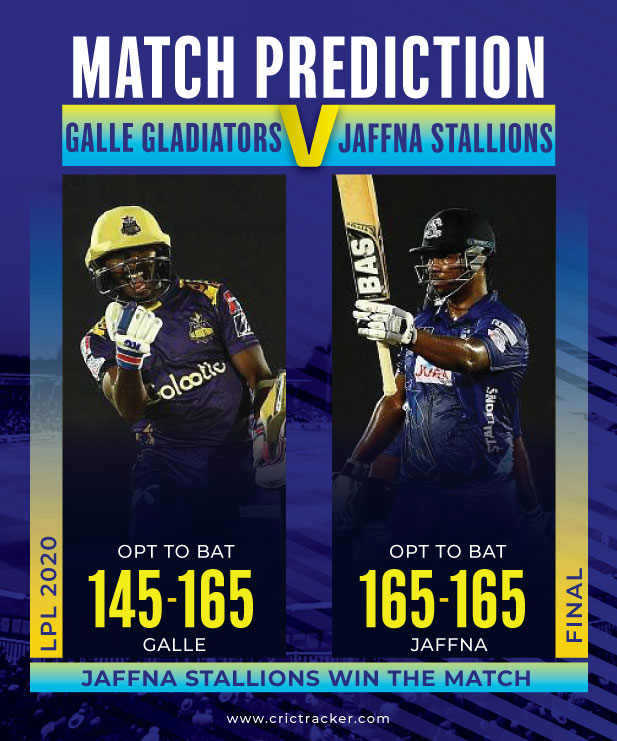