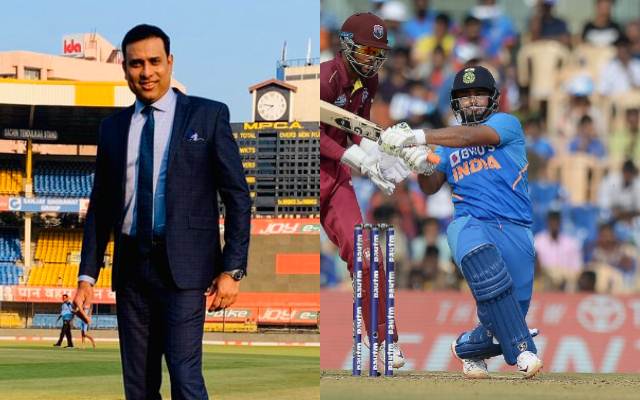 India lost the series opener of three-match ODI series against West Indies by eight wickets. But, one thing that India can take as a positive from their defeat is the arrival of Rishabh Pant back in his form. The young wicket-keeper, who was censured after successive failures in international cricket, played an impressive knock at Chepauk. VVS Laxman, the former Indian batsman has come out praising the Indian gloveman along with Shreyas Iyer for leading from the front when their side was struggling.

Rishabh Pant has been censured by the fans and was brought under the scanner for performing poorly on numerous occasions. He became the regular face behind the stumps in the limited-overs for Virat Kohli and Co after the conclusion of the 2019 World Cup. However, Pant has a huge task ahead of him of filling the shoes of former Indian skipper MS Dhoni.

In the series opener, he came out to bat when Team India was struggling on a score of 80/3 with their top-order being sent back to the pavilion by West Indies bowlers. At that time Pant came and stitched a brilliant partnership with Shreyas Iyer of 114 runs. He played a decent knock of 71 runs off 69 balls with seven boundaries and one six before getting dismissed off Kieron Pollard.

VVS Laxman said that Shreyas Iyer played the role of a dominant partner and that allowed Rishabh Pant with some time to get settled down. As soon as Pant got settled down, he started smashing the bowlers as per his will. It was good to see that finally, Pant was back in form with the bat.

It was interesting to watch that he was brilliantly using the crease against the West Indies bowlers to get used to the pace of the ball. According to VVS Laxman, Pant played a mature knock against the visitors in the series opener.

“Shreyas Iyer played the role of a dominant partner. He allowed Rishabh Pant to settle down. Once Rishabh Pant settled down and got to know the conditions well, he was playing his free-flowing shots.

“Good to see him get back that confidence because he is a confidence player. We know what he has gone through over the last 4-5 months. The way he was using the crease against the fast bowlers, just to make sure that he got used to the pace of the wicket. I thought it was a very matured knock,” VVS Laxman said on Star Sports.