Has Gautam Gambhir's contribution been overlooked amidst the euphoria that surrounded MS Dhoni's innings in the 2011 World Cup Final?

Has Gautam Gambhir’s contribution been overlooked amidst the euphoria that surrounded MS Dhoni’s innings in the 2011 World Cup Final?

Gambhir has never got the credit that he deserved for his innings even to this day. 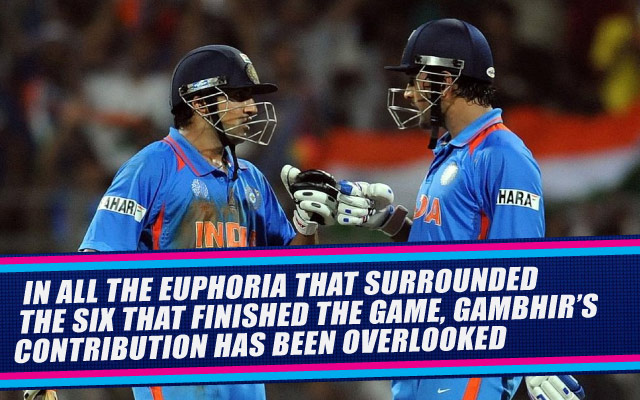 “Dhoni finishes off in style, a magnificent strike into the crowd. India lifts the World Cup after 28 years. The party starts in the dressing room. And it’s an Indian Captain who has been absolutely magnificent in the night of the final.”

If you are an Indian cricket fan, you don’t even need the visuals for these words. It brings instant tears to our eyes when we listen to these immortal words from Ravi Shastri. MS Dhoni’s six on the night of April 2nd, 2011 that sailed over Long On gave India their proudest and most cherished sporting moment of the new millennium.

Tributes have been written about Dhoni’s knock and it has been replayed a million times on our TV sets. Dhoni has immortalized himself in the hearts of Indian cricket fans and his blistering 91* in the 2011 World Cup final will forever be remembered with a sense of fondness by Indians across the world.

But then, have we forgotten another man amidst all the euphoria that surrounds Dhoni’s innings?

Have we forgotten the valiant 97 that Gambhir scored on the same night that laid the platform for Dhoni to take charge?

Was Gambhir’s innings as worthy or even more than the knock played by the skipper?

The context in which Gambhir’s innings was played is really important to fully understand the value of his innings. He came in at 0/1, with India’s destructive opener Virender Sehwag out for a duck off the second ball of the innings. India experienced another setback when the legendary Sachin Tendulkar nicked Lasith Malinga to the wicketkeeper and the scoreboard read 31/2.

Gambhir went about repairing the innings under these circumstances and forged a match altering 83 run partnership with upcoming batsman Virat Kohli. And by the time Dhoni entered the crease, Gambhir was well past fifty and had set the stage for the skipper.

This is not to pour scorn over Dhoni’s innings

This is, however, not written to take any credit away from Dhoni and the way he played on that day. Dhoni was at his sublime best, and probably played the most important knock of his illustrious career. After Gambhir’s departure, Dhoni continued to keep the runs flowing, was severe on any loose delivery offered by the Lankans, and of course, finished things off in the best way possible.

But then, wasn’t Gambhir the architect of the Indian innings on that day?

Even the Man of the Match award was given to Dhoni, which in retrospect seems like a debatable decision. Gambhir had every reason to be disappointed and deserves the limelight as much, if not even more than the skipper himself for his valiant innings.

Gambhir has never got the credit that he deserved for his innings even to this day. Yes, Dhoni was the man who sealed the deal, but it was Gambhir who laid the foundation for him to do so. And, in all the euphoria that surrounded the six that finished the game, Gambhir’s contribution has been overlooked.

Without the base, the building loses its fundamentals, however beautiful the finishing touches are. And on that fateful day, it was Gambhir’s 97 that acted as the base on top of which Dhoni built his beautiful monument on the night of April 2nd 2011.