After this sensational draw between Australia and England, the Aussies are occupying 2nd place in the points table.

What a match! Adrenaline pumping! Nail-biting! And in the end, England held on. James Anderson played out the final over of the Test match bowled by Steve Smith as England avoided defeat at the Sydney Cricket Ground (SCG).

England started the day with their scorecard reading 30/0, in pursuit of an improbable target of 388. Haseeb Hameed departed for 9, while Dawid Malan walked back after contributing just 4. Australia would have sensed an opening after Zak Crawley fell for a quick 77, but Joe Root and Ben Stokes combined to put on a partnership of 60 runs. More importantly, the duo played out 25.1 overs to keep Australia at bay.

After the departure of Root, Jonny Bairstow and Stokes kept the fight going, but Australia fought back as Nathan Lyon dismissed Ben Stokes. Jos Buttler then departed for a 38-ball 11, after which Mark Wood was snaffled for a duck. England would have had their hearts in their mouths when Jonny Bairstow departed for 41.

Jack Leach and Stuart Broad then defiantly played out 8.4 overs. Steve Smith then dismissed Leach in the dying moments of the match to once again increase the tension in the England camp. However, Broad and Anderson played out the remaining deliveries as England eked out a draw with just one wicket in hand.

How does the WTC points table look like after the 4th Ashes Test?

After this sensational draw between Australia and England, the Aussies are occupying 2nd place in the points table while England are placed at the last spot. The table is topped by Sri Lanka, while Pakistan is placed at the 3rd spot. The Indian side is currently occupying the 4th position in the table.

South Africa are occupying 5th place, while the 6th spot in the table is occupied by Bangladesh. While the West Indies are stationed at the 7th position, the 8th place is occupied by the New Zealand side. 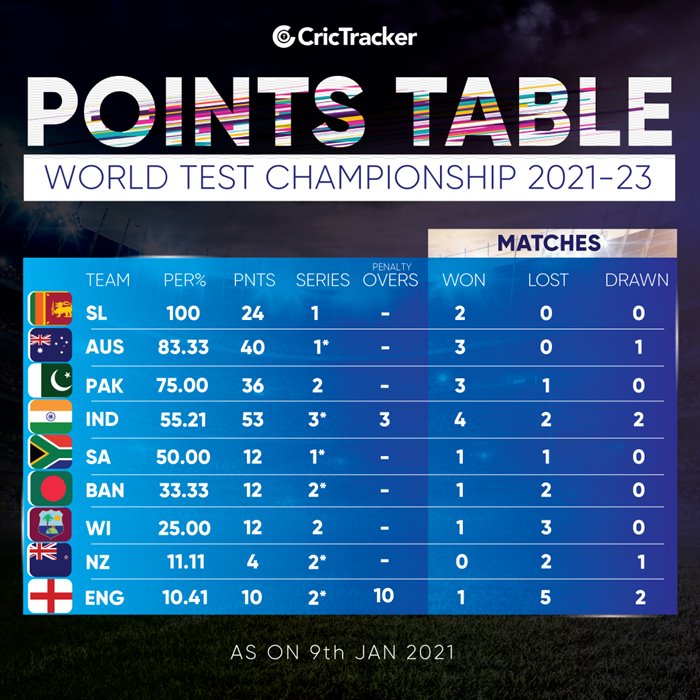